Before I left for this trip, it occurred to me that it would be nice to be able to treat some of the time as a retreat. Time with friends and family, as pleasurable and occasionally lazy as it was, and a weekend of teaching, left me feeling very ready for a few quiet, unscheduled days.

Last year when I was over, some friends and I reminisced about a trip we had taken together to Portugal in the mid-nineties, to a town I had visited on other occasions, and decided it would be great to all do it again. For my UK visit in April I had raised the topic, but nothing had materialised, and the same looked like it was happening this time around as well. My plan B had been to spend a few days with Djinn in Belfast again, but she was needing to take care of her parents, so I decided to make the trip to the Algarve by myself.

Leaving Hebden Bridge on Monday morning, I found myself on a train filled with chatty schoolkids and more taciturn commuters, which seemed to get slower and slower as it approached Leeds, leaving me just a couple of minutes to catch the bus to the airport. On the way out of the city, it was clear that the autumnal morning mist had turned into thick fog.

Once through security, I discovered that many fights were being cancelled; information about my flight did not appear until almost the scheduled departure time, and I had spent the intervening time wondering what I would do if I couldn’t fly out. In the end, we were lucky: the incoming flight had been able to land when others had not, and we took off only about half an hour late.

Landing at Faro, and getting my rental car was very smooth; before I knew it I was on the autoroute with a big smile on my face, for the fact that I had actually made it, heading to Sagres, which, when I arrived, seemed happily familiar in many ways.

The guesthouse where I am staying has bikes to borrow, so on Tuesday morning I pedaled along to Cabo de Sao Vicente. I had strong memories of riding this route thirty years ago, with my then girlfriend who did not enjoy the slowly rising road in midsummer heat. The destination is worth it though, and I was glad to arrive just before the first of the big tourist buses. Mostly I sat outside the walls of the lighthouse, gazing at the quite placid blue Atlantic, remembering similar places I have been, such as Malin Head, and Cape Agulhas at the southern tip of Africa. While every visitor seemed to be moved by the wildness, it was still hard to imagine what the place must have represented in ancient Europe, when it was the most south-westerly point on the landmass, and nobody knew what lay beyond the horizon. After a while it was nice to return to town and eat lunch back at sea level, on the beach we used to visit, and then sit and watch the waves for a while.

The next day (yesterday if you are reading this when it is published), after a few bouts of rain in the morning, the day cleared and I walked up to the historic fortaleza, which played its part in Portugal’s maritime history. Behind the walls, there is a lot of space on the promontory, so that even though the crowds were bigger, there was again a real sense of desolation and wildness. I spent the main part of the day happily watching the ever-changing skyscape as the weather moved through from land to sea, and, once I had circumambulated the promontory, watching the waves from the beach again. Good meditation, and hopefully many good photos.

We managed to dodge storm Ophelia on the way down on Monday, but it was most grey when I arrived in Sagres. 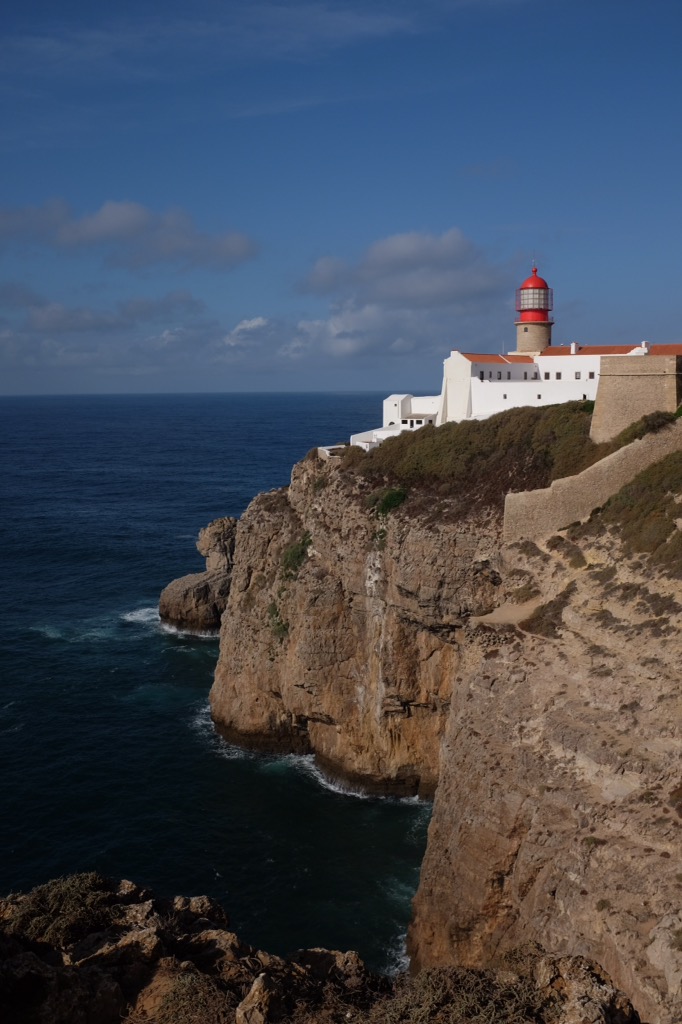 A view of the lighthouse at the Cabo de Sao Vicente. 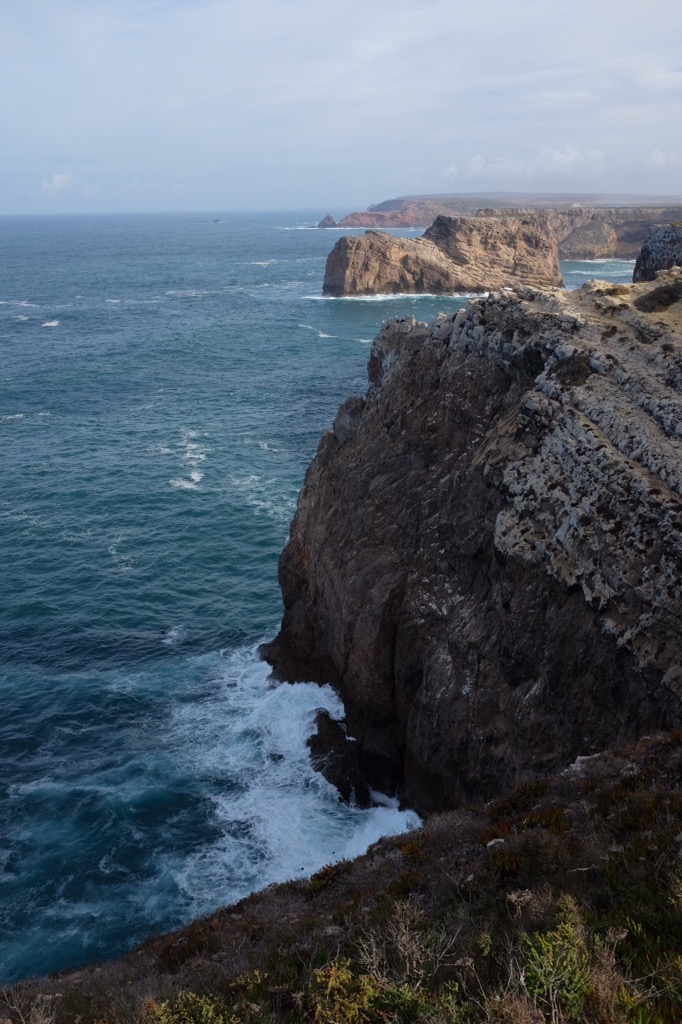 Looking up the coast from the lighthouse.

Looking back towards the Fortaleza de Sagres.

Tonel beach from the cliffs by the fortaleza.

Looking back towards the Cabo de Sao Vicente.

The path to the lighthouse at the end of the promontory. 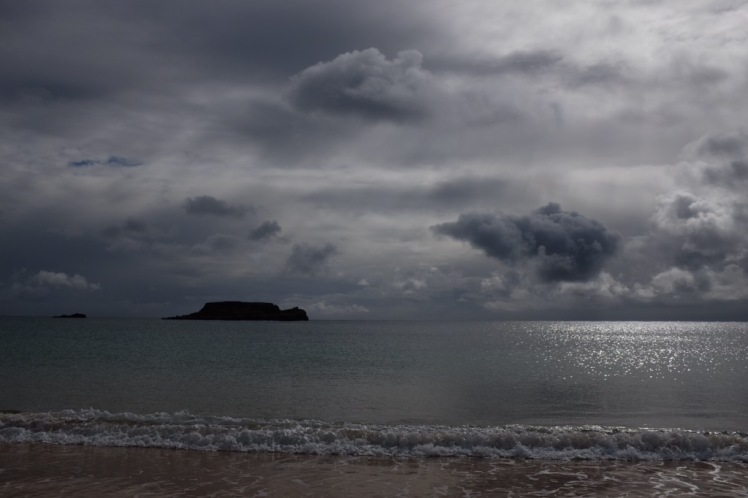 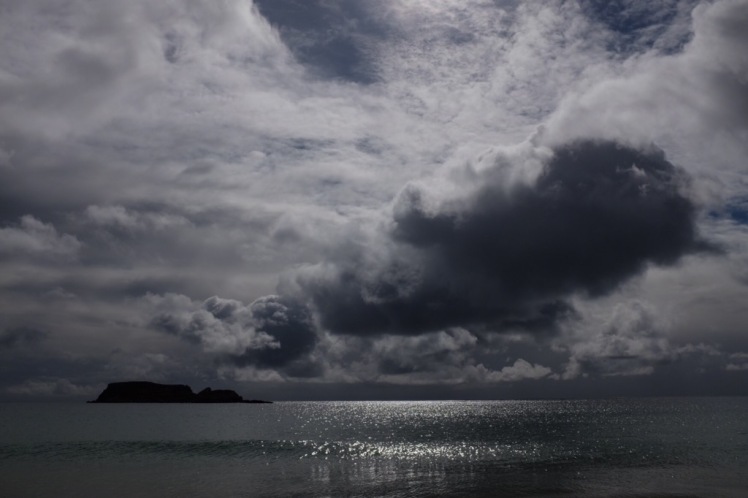 I think you could call that a weather front.