The second and last shuso ceremony of this season was at Green Gulch on Monday. Zachary and I had consulted, and figured that we could pack up our cushions, head on over right after the lunch-time outdoor sit, and be there in good time; it all worked out as well as we had hoped.
It was a lovely spring day at Green Gulch, just as it had been the Monday before at Tassajara, and I got pretty warm in the zendo as we sat through the questions and congratulations.
I have been to a few shuso ceremonies there now, but mostly I haven’t been able to stay for dinner. Zachary took off after the ceremony, but luckily Tova offered me a later ride, meaning I could stay and chat, and then indulge in the the pizza and ice cream, which, as I hadn’t really had any lunch, went down very well.
Bryan was the shuso; he and I go back a dozen years, as he arrived at Tassajara in 2006 – along with Thiemo and Steph, who were around at Green Gulch with their two adorable kids – right when I was settling in for my second two-year stretch. Mostly what I remember, and very fondly, are the many hours we spent running together on the trails over those two years; he had to wait for me often enough, being quite a few years younger as well as being a great natural athlete. I can only remember one time, the No Race in 2008, when he was off-form, and I was almost slowing for him so we could finish together. There were many other adventures as well, especially around the 2008 fire, as we scouted on the peaks, climbing Hawk Mountain or the Tony Trail every day.
I haven’t heard him give a dharma talk yet, so I don’t know how he fares in that respect, but I know that he was a great monk, throwing himself whole-heartedly into everything, and embodying the teaching just by doing that. And that is what it is all about, at least in my book. 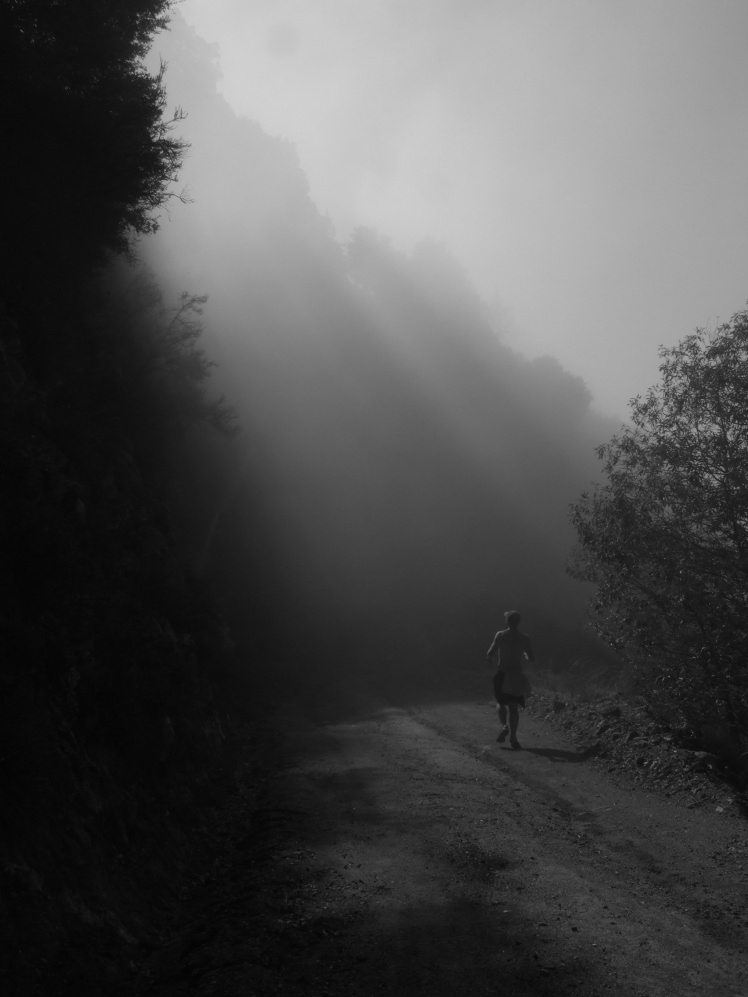 I am very glad that I took my camera on some of the runs we did. This was a morning we ran to the top of the road, and in doing so climbed above the cloud level, which was at about 3000 feet, into clear blue skies. Running back down into the clouds was quite dream-like. 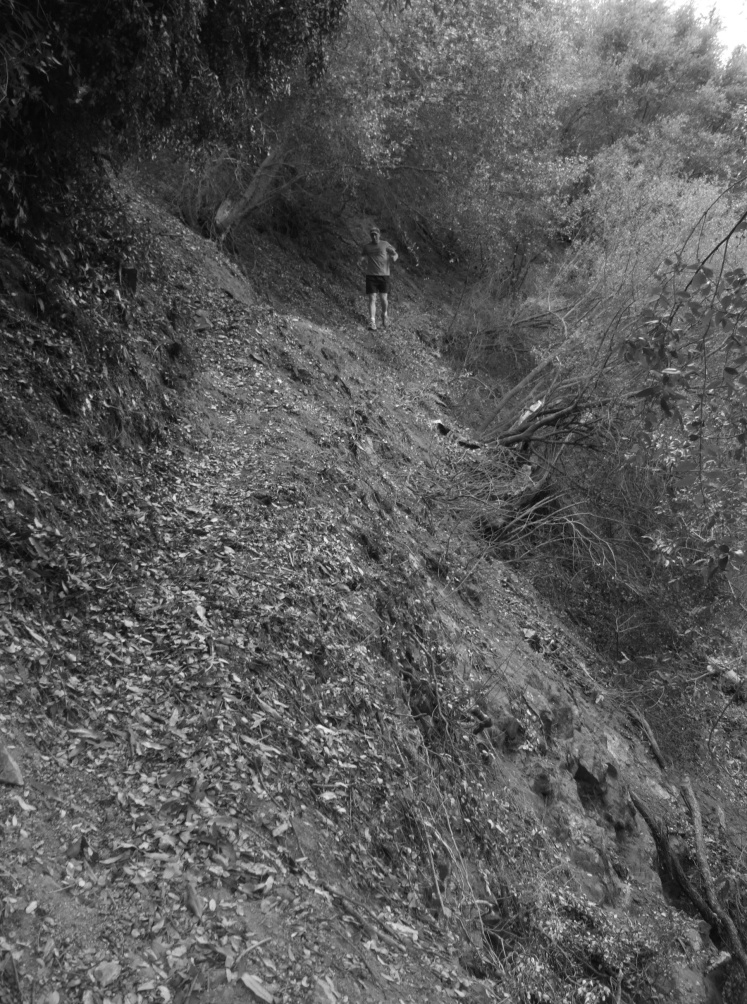 This was a particularly narrow and slippery part of the Tony Trail. Guessing that this was the same run as the next picture, we would have climbed at least 3000′ by then, climbing the Tony Trail from both sides.

This was a lovely section of oak meadow up Willow Creek, past the other end of the Tony trail, about five miles from Tassajara.

After the 2008 fire, Bryan and I climbed up Hawk Mountain and discovered that nothing was left of the old telephone transmitter. Then we scrambled down again. 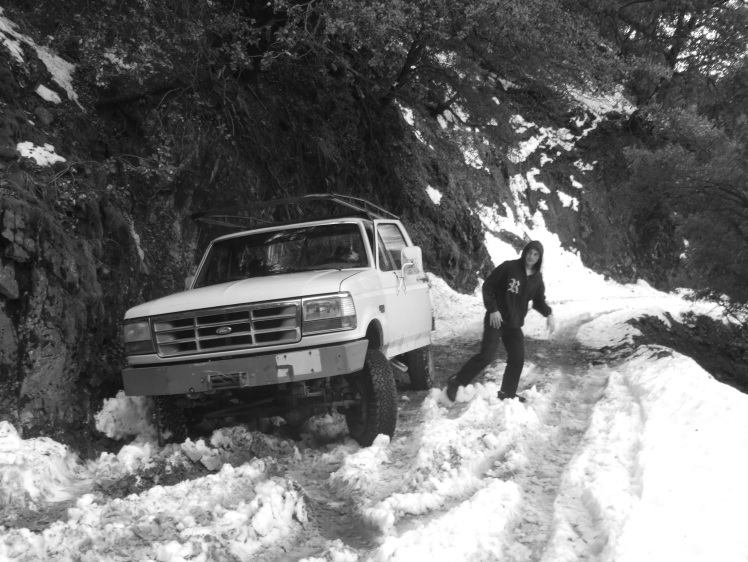 One time I had got a Suburban stuck in a ditch in the snow as I tried to drive Jordan out. I ran a couple of miles back down to Tassajara and Bryan brought up the lumber truck with the winch, but even that struggled nearer the top. We eventually gave up, and tried again the next day.

Bryan with Fu and Zenju, who were co-leading the practice period at Green Gulch.

Bryan, with Mako (who was a big part of those years at Tassajara), helping the dish crew by saving on dishes.

There were more flowers on the farm than on my last visit. 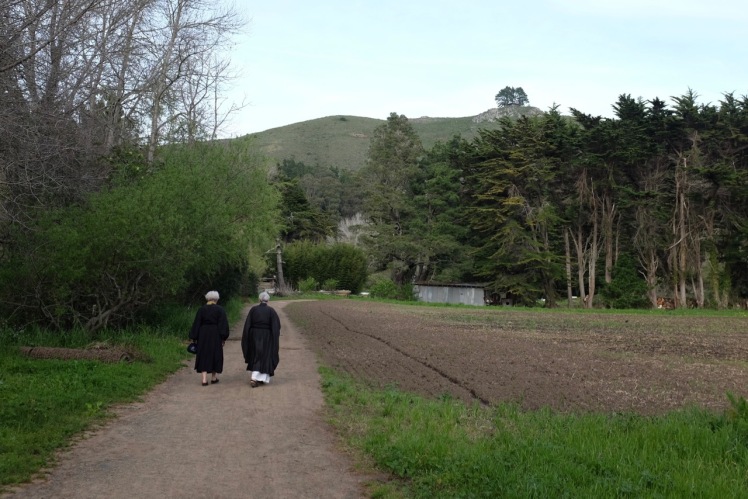 Dharma friends on the path. I suspect this will get used in many Zen Center publications…