When, for a few days last week, it looked like I wouldn’t be getting up to Wilbur after all, I wondered if I should write a post about the World Cup in the space I had left for myself. After all, it has consumed a fair amount of my time this past fortnight; the first round of games were immensely entertaining; England had not embarrassed themselves – rather they were playing with something approaching joy and confidence (this might not last for many hours after this post is published…); there was also the meagre schadenfreude of lasting longer in the competition than the Germans (I saw many pieces of writing suggesting that our inferiority complex stretching over fifty years of competitive football could only be mitigated by references to the world wars, which does say something about the attitude of many people in England); there was a partial reliving of conflicts in the Balkans; there was expressive play from many countries, even those on their way out of the competition.

I also got to read a piece by England team member Raheem Sterling, a divisive figure in the UK solely, it seems, by dint of being a successful Afro-Caribbean player who feels no shame in being successful and thus wealthy. Alongside which, I recently saw two articles around players whose careers and talents I remember enjoying in my younger years, belying the lazy stereotype of footballers being inarticulate working class oafs: Stan Collymore, who is also not shy to point to endemic racism, and Neville Southall, who is championing the marginalised in all areas.

In not-unrelated news, the political discourse in the States seemed to take a sharper turn last week with the impending Supreme Court vacancy. I noted that it was two journalists of colour who I enjoy reading, Charles Blow and Ijeoma Oluo, who sounded the alarm most clearly, no doubt because they can see and feel more acutely the reactionary forces at work.

Personally, apart from my general disgust at how so much of the political scene has wallowed in division and exclusion these past two years, I am at a loss to imagine that abortion could soon become illegal again, especially so soon after Ireland, which we grew up regarding as the most socially conservative country in Western Europe, has just voted in the opposite direction.

I would like to believe, as I read from time to time, that these are the death throes of the old white patriarchal system, reluctant to give up its ingrained privileges (many of which I share in, of course) in the face of demographic shifts, trying anything to maintain the static social hues they feel most comfortable in. I look forward to the resumption soon of the ongoing arc towards social justice and inclusion for all, especially those who currently have less of a voice.

I had saved these two pictures for myself already; this one of Xherdan Shaqiri from the match refered to above. 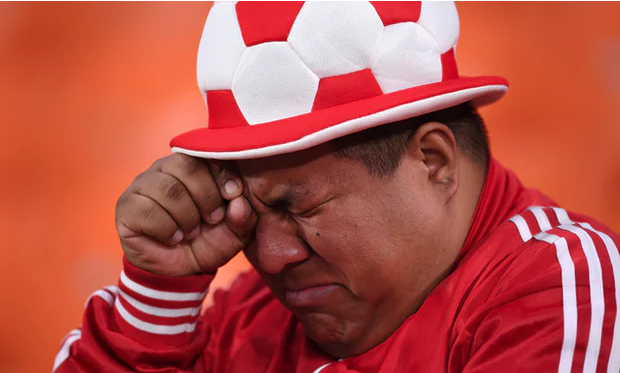 And this one of a disconsolate Peruvian fan.