In the end, I woke up very early on Saturday morning, bothered by back pain, so I had no reason not to get up and go to Zen Center. I arrived just as the han started, and the ino showed me to a seat next to Bryan (one of the few changes since I left is the way that all the seats are assigned to residents, as they are at Tassajara).

I settled with the familiar flow of the instruments and the jundo, marvelling at how fifty people can be so quiet together, even as the traffic noises from Oak rose and fell in traffic-light-induced waves. Upstairs at service I noticed how I still want all my movements to be crisp and tidy – and that mostly happened – my memory of the forms is still etched in my body.

There were a few smiles and raised eyebrows at my presence, and, once we started talking at breakfast, some words of surprise and appreciation that I had joined the schedule. It was certainly nice to be among friends.  I may even do it again soon. And then I went off to offer the zazen instruction, which seemed to go pretty well, and later went across town for the roam.

When I had scouted the route last Saturday, it had been warm and sunny, though the wind had been fierce – for the roam itself, the fog had descended right across town, which meant we could not see far in most directions; sitting up at the water tower, fog poured through the trees at speed, though there was warmth and shelter in the lower parts of the park, and a little sun at the Bayshore end where we sat peacefully above the houses and the water. The sounds of the city were muted, but there was a continual soundtrack of hawks mewing, mostly as they seemed to be being harassed by gangs of ravens. 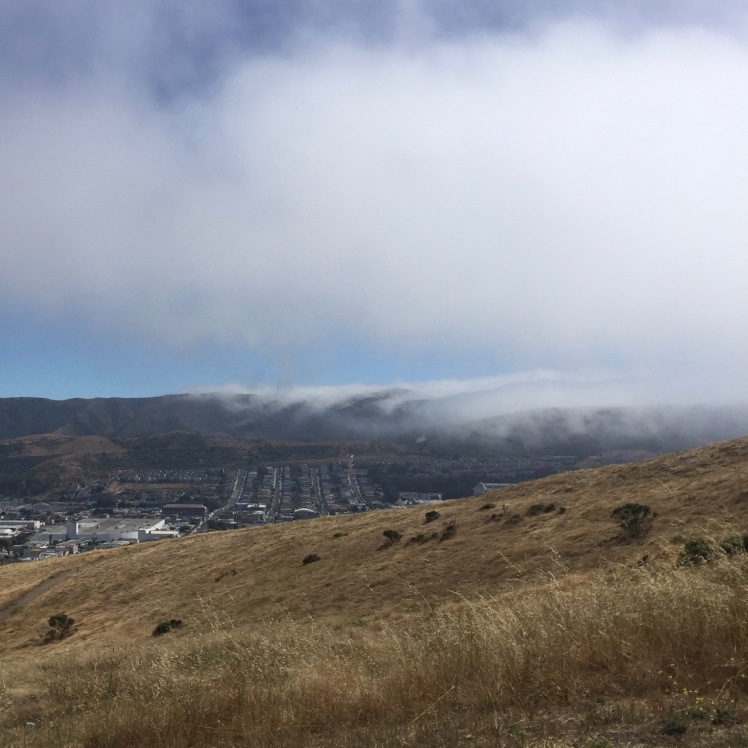 The fog rolls over San Bruno Mountain, while Visitacion Valley and Cow Palace are clear.