I had originally thought that my night in Newmarket would be the only time I would be spending by myself on this trip. But the friend I was going to stay with on the south coast messaged me to say that she had been invited to a film festival her friend was putting on, and that she would be flying to Chicago on Wednesday; since her husband was already away for work, I would have the house to myself for a couple of days.

Still, I got to travel down on a wet Monday, through London, to the coast – and then back with her on Tuesday for a day in the city, before that happened; my fourth different bed in a week, and finally settling into full nights of sleep, albeit woken early by the numerous gulls.

There has been an autumnal cast to the landscape, the trees starting to turn, and ploughed fields seen from the train. The weather has been a little schizophrenic in a way that I have grown unused to in California: so far I have had two sunny days followed by a wet day, a windy day, a sunny day, a wet day, a warm day, a wet day, and then Thursday was mostly grey on the coast, but tending towards sun.

I did manage the first run of my trip on Wednesday afternoon, wisely setting off along the sea front to the west, into the stiff wind, all the way to the locks at the end of Shoreham Port, and then back with the tail wind. It was dead flat, but an hour of running sets me up for my usual visit to Devil’s Dyke, which I am planning for Friday.

On Thursday I walked in the opposite direction, all the way to Brighton Marina along the sea front, and then back via the little lanes and villa-lined avenues. I would have prefered sunlight for my photos, but the light was soft, the colours muted.

In the hours of silence I write to friends and think about how my next talks are going to hang together from the material I am gathering.

Arriving into London on a wet Monday. 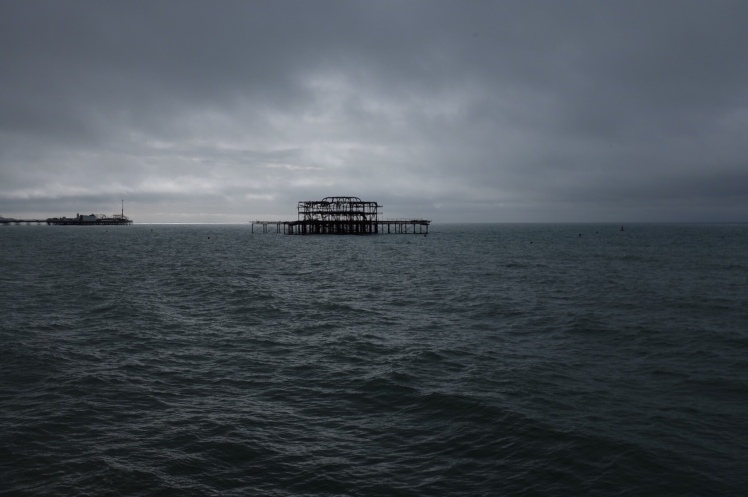 The photogenic West Pier in Brighton. It was not really that gloomy.

A tranquil park in Hove.