My last teaching stop for this trip was Hebden Bridge, which I always look forward to. For once it wasn’t raining in Manchester when I passed through, walking from station to station, but I was half-way to Rebecca’s house from the train when it set in.

We had divided the weekend into three parts, as before. Friday evening was zazen, with a little introduction for a couple of new people, followed by a talk. I did a remix of the talk I had given in Wimbledon, and it came out somewhat different, perhaps holding together slightly better, and I included a couple of quotes I had used in the Newmarket talk, which Rebecca and Paddy had heard before. The same material may form the basis for the talk I am due to give at Zen Center in December, as it seems to have gone down well here.

On Saturday a similar number – just in double figures – came and sat for the day. It felt very quiet and settled, and I enjoyed the tea-time discussion. At the end of the sitting we did some doanryo training, which took me back to my years at Tassajara, rehearsing and repeating the beginning and end of sutras and dedications, with different people taking turns on the instruments.

The day ended, as it has in previous years, with a pie and pint up the hill at the Hare and Hounds, where the conversation turned to the state of zen in England and what could be done next – there were some valuable perspectives, and it still feels like a big shift is a few years away.

The rain had continued on and off, and the forecast for Sunday was gloomy enough that several people canceled for the final, outdoor portion of the weekend. We had a shorter roam, on a route that Rebecca had chosen, so I was happy to let her lead and follow along with my camera.

The landscape is tremendous, and we went from being beside the canal to being up on the open hill-tops, via beautiful winding paths through the trees,, in seemingly no time. We were able to sit on a typical stone wall looking out over Hebden, and while the skies were heavy, it barely rained at all, and we had a fair bit of sun. Some of the footpaths, though, were saturated, and even submersed in places, so I had wet feet by the time we got back down to the canal for the final part – meeting with Miranda at the Callis Garden, which she helps manage in what had been waste land beside the canal.

She had lit a fire under a canopy, with logs and benches around, and a kettle hanging on a tripod to boil. She offered various teas from local herbs and flowers, as well as freshly picked russet apples and hazelnuts. I invoked the first line of the meal chant (“We reflect on the effort that brought us this food, and consider how it comes to us”) – apart from the blackberries I picked from the fields in Cornwall, I have not eaten anything so close to where it grew for a long time; Miranda also invoked the people who had planted the trees and hedges whose fruits we were enjoying. I reflected to the group how intimate we were with the elements, in ways that is deeply nourishing – even with cold wet feet; about the traditional zen connection to nature; and about the way man-made structures like the canal and the stone walls had become a part of nature for us.

Rebecca had trailed the event with a line from a beautiful new song: “Let the heron still your breath,” so I told the story of Xuansha and the swallow. And we practised plaiting stalks of wheat in traditional patterns.

It was only a short walk back to Rebecca’s, and since the weather was still clement, I wasted no time in getting into my running gear and heading out. I had decided to run the same route as I had last year, in the other direction. This meant climbing the long stone steps up the hillside very soon after starting, which was a shock to the system, but also meant that I didn’t have much more climbing to do afterwards, as I followed the slope around to Colden Water, staying above the woods on a very sodden path, and then striking out over the hills, again filled with sheep between the stone walls, over the top and down into Jumble Hole, where the steep stone-laid path right above a cascading, full river felt quite precarious. But it was all wonderful again – not just the incredible moorland views, but also the deep sense of the joy of running, that had been so strong last time out. And, after so many runs in six of the eight places I have stayed in while I have been here, I didn’t feel so bad this time. Now, of course, the trick will be getting back on my bike in San Franciso at the end of the week; though it seems that at least I am guaranteed some sunshine there. 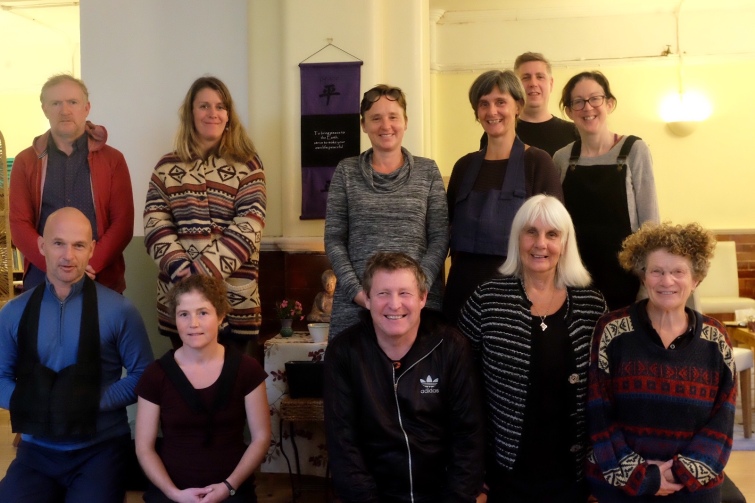 The group who sat together on Saturday. 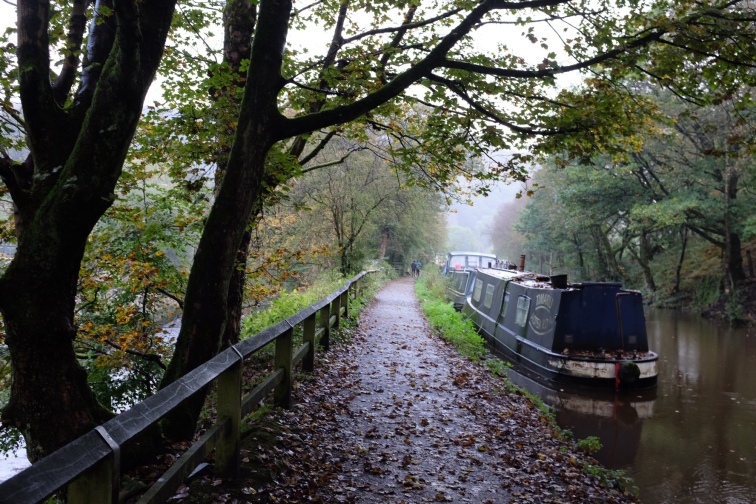 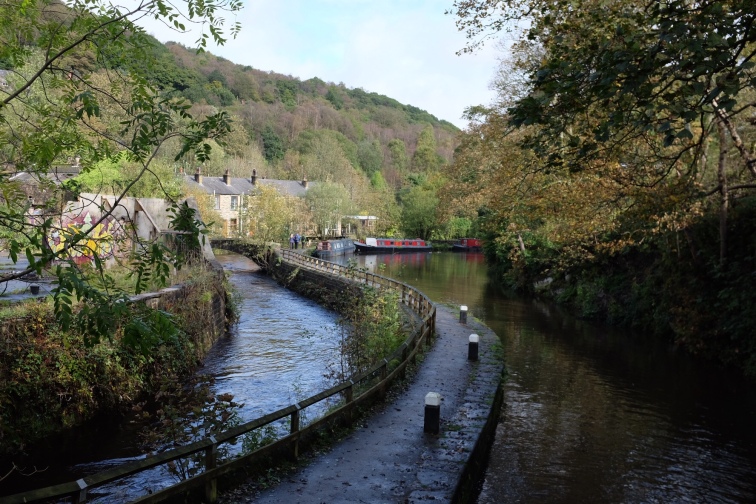 The full river running alongside the canal, with clearer skies. 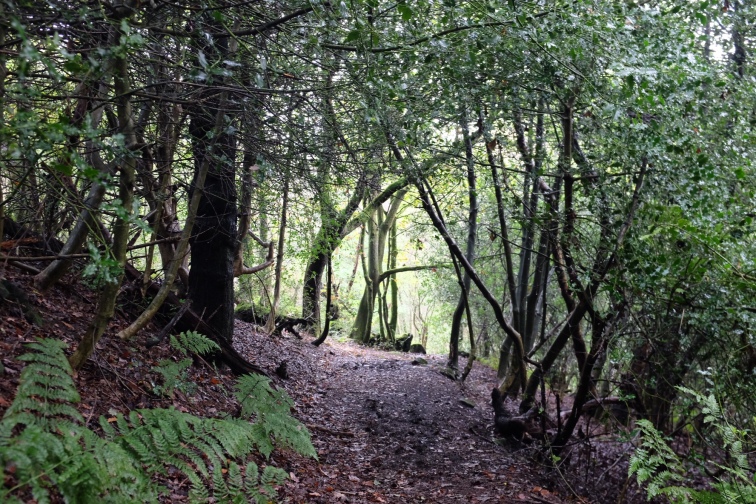 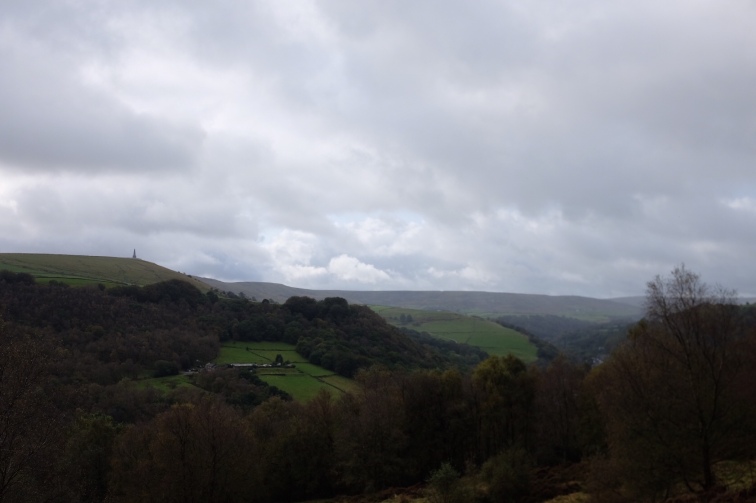 The view across to Stoodley Pike. 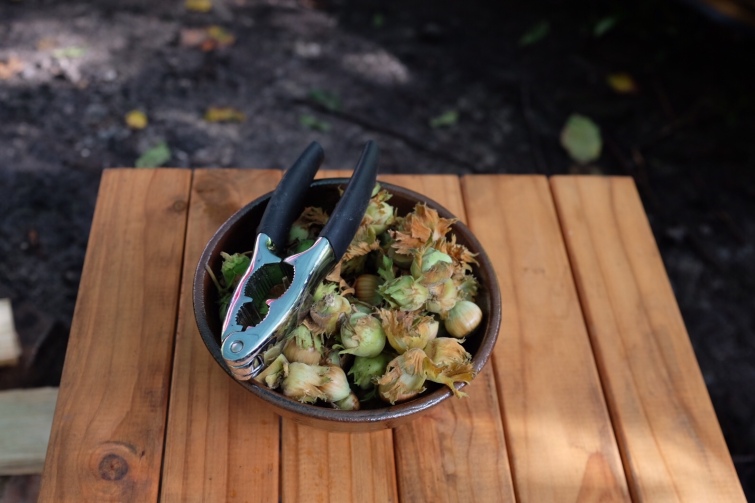 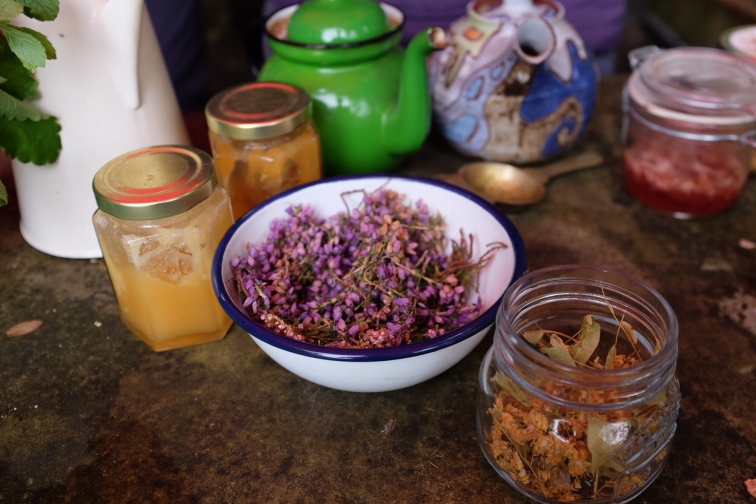 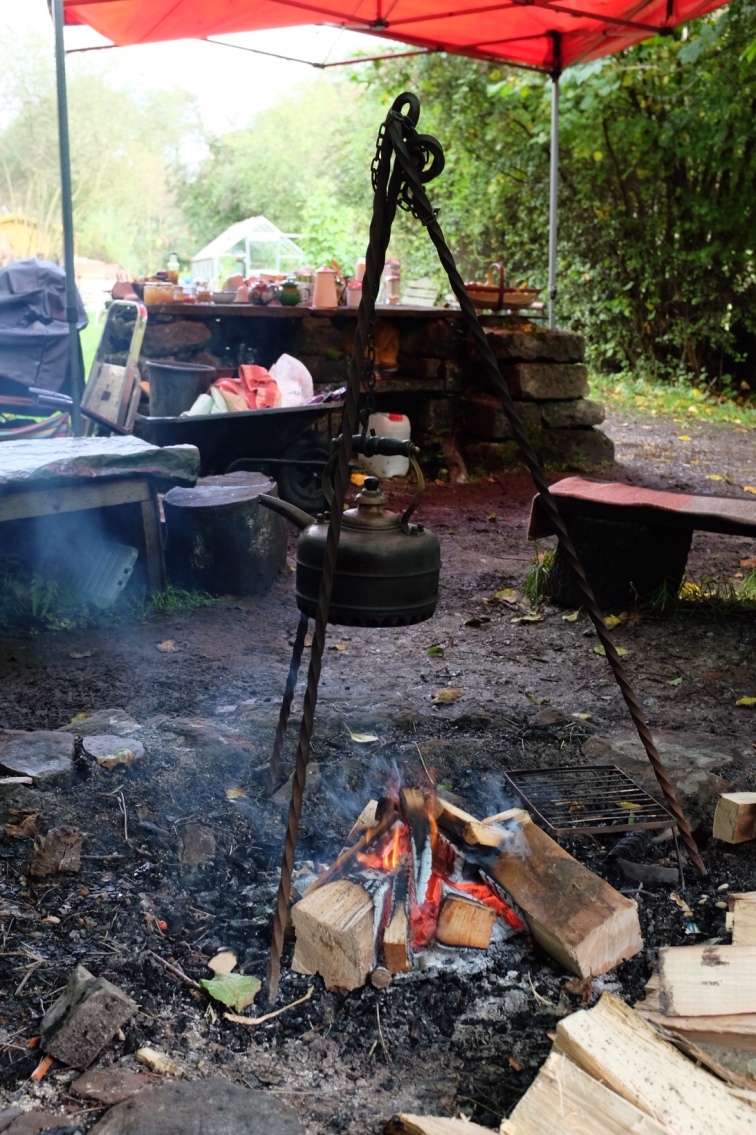 The offerings at Callis Garden. 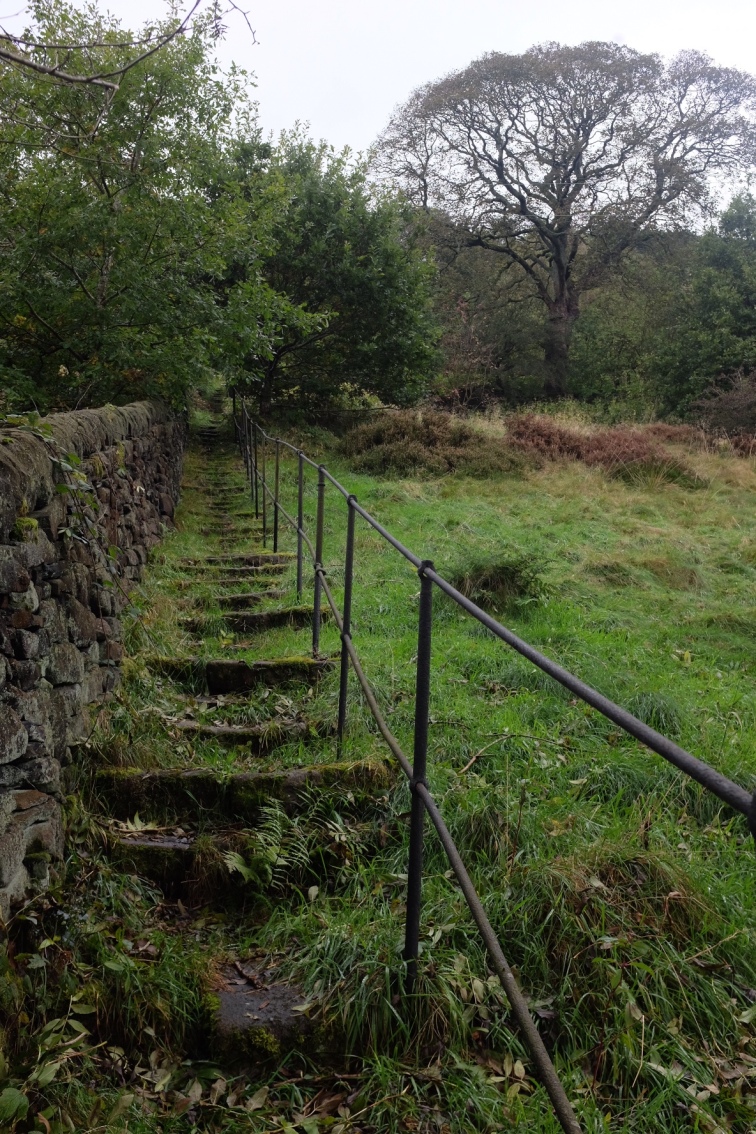 Part of the stairs climbing the hill.