Driving up to Wilbur last Friday, in hazy sunshine, the spring colours brought to mind one of those Sisley or Pissarro paintings that I enjoyed discovering in my youth. The Capay valley was bright green, and then the highway was studded with redbuds the length of the canyon, the vivid pinks almost shocking.
Even though I arrived in the middle of the afternoon, I could not bring myself to go out for a run right away, but instead relaxed in the pools, where, after dinner, the full moon rose in a smudge of clouds, shimmering in the water.
I slept long and deep, as sometimes happens at Wilbur, and relished the eighty degree weather each day. The meditation sessions were well attended, and a couple of times the discussion gained some real depth, giving me the chance to meet people fully, which is always rewarding.
I did run on Saturday, in the middle of the day, which made for hot work getting up to the ridge. This time I was more worried about rattlesnakes than hunters (though we did hear gunshots the next day), and in the end saw nothing more dangerous than a squirrel. The ridge was also home to many redbuds, a carpet of lupins on the schoolhouse trail, and other flowers I recognise but could not identify.
The next time I visit will be the end of June, when the temperatures will be even higher, and the flora a little less fresh. I am sure I will find it just as restorative.

Almond blossoms on the 505.

The path from the baths to the campsite, which was full along with the rest of Wilbur.

I thought of the title for this post, having been discussing Xuedou’s poems and the similar image from the Genjo Koan with my students, so I thought I should take a picture to match – this is the setting moon on Sunday morning. 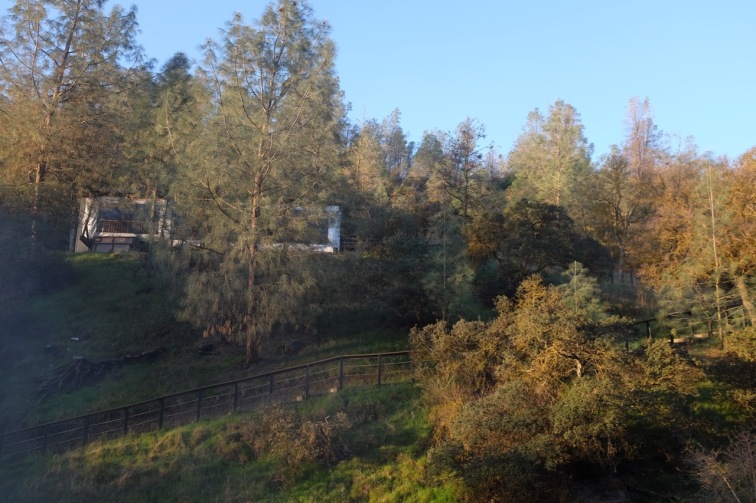 First sun on Sunday morning, illuminating the path to the yoga deck where we sit.

First sun at the big pool, which was warm enough to be in at all hours of the day.