The rains that have filled this winter abated for a couple of days – though they are due to have returned by the time this is published – so I made the most of the clear sky lull by getting outside.
Friends and peers in transition have cautioned me to watch out for old bad habits creeping back in now that I am away from the temple, and I do notice that happening a little for me – and I am trying to meet this with caution rather than prohibition. I feel lucky though, in that from the age of fifteen on, I have used exercise to help keep myself in check in that regard.
On Wednesday, I set out on my bike to ride around Paradise Drive in the morning, another of the beautiful routes I did not think much of a challenge when I had fewer opportunities to ride. In the afternoon I set out on foot, with my camera, to Farley’s – basically thirty blocks along the same street – since I had not been there in some time, and wanted to know how much room I had for showing pictures next month. The route took me across the low-lying basin of Mission Creek – the centre-piece of the original European settlement, now a busy and long-gentrifying area – before rising up into the quieter surroundings of Potrero Hill, bounded on each side by noisy freeways; after my visit and a coffee, I continued east to the more newly gentrified Dogpatch by the bay to catch the streetcar home.

Yesterday, after spending too much time reading inconsequential things online, I went for a run to Twin Peaks, clear above the city, enjoying the swooping views in the way I remember from being out on the trails of Tassajara, quite intoxicating when mixed with the sense of accomplishment. The last time I was up on Twin Peaks was the afternoon of New Year’s Eve, and it was crowded with families, whom I presumed to be catching the last sunset of the year over the ocean. This time there were just a few people with cameras, other runners and hikers, and I got a joyful sense of being away from crowds and routines – the same joy that I got from being early onto the roads of Marin on my Sunday morning rides.
As I re-orient myself in my new abode, in addition to revisiting familiar hide-aways – the Pemberton Steps, the Interior Greenbelt – I have come across some other trails and staircases that don’t figure on the online map I have been using: unexpected views suddenly reveal themselves as I take tucked-away shortcuts from one slice of the city to another.
People around Zen Center are fond of quoting the lines from Leonard Cohen (whom we like to claim as one of our own in any case): ‘There is a crack in everything/ That’s how the light gets in.’ On my way up and down Twin Peaks, I was reflecting that it is true for cities as well: it is the hidden corners, the break in the grid, the compact open space with a stunning view, that reveal the true beauty of the city. 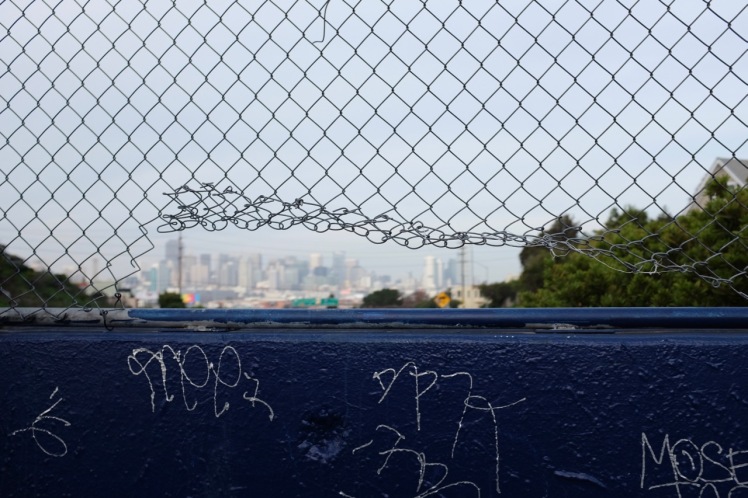 A view north from Potrero Hill from my Wednesday walk.

I had chosen these two shots to potentially include in the Farley’s show, but there will not be room for them after all: 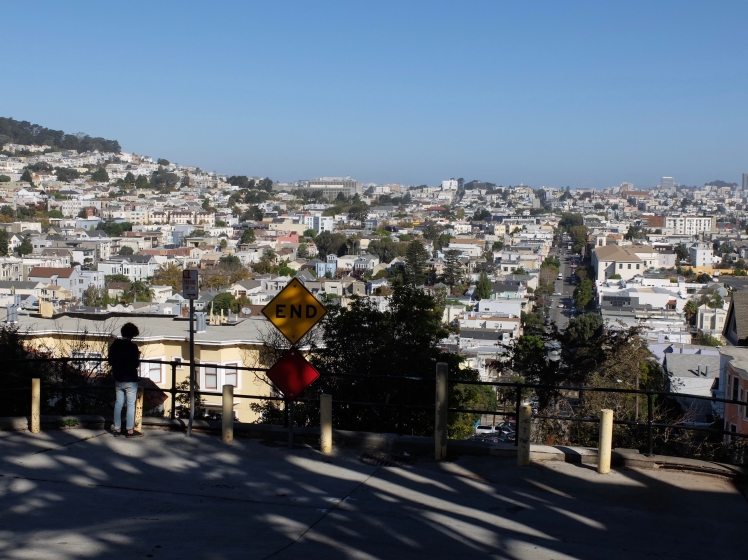 The view north from Liberty Hill 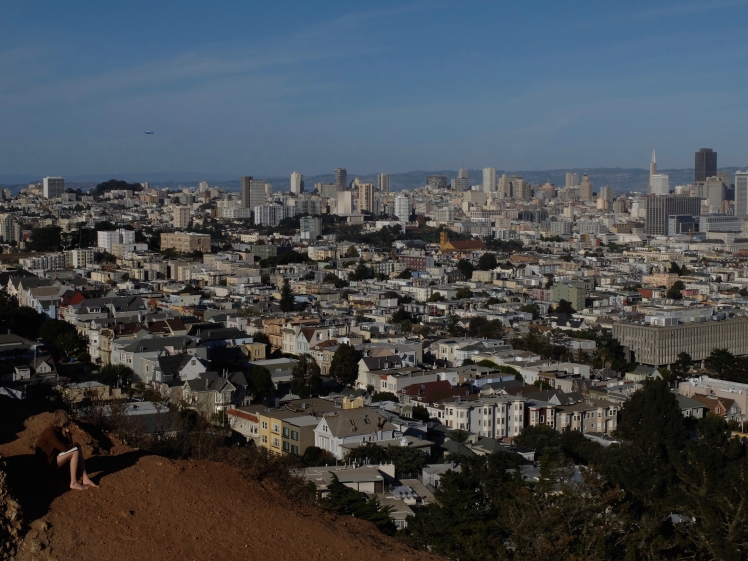 The city from Corona Heights