I did not get the chance to run while I was at Tassajara – or perhaps it would be more accurate to say I did not take the chance. During the free time I had in the afternoons, it was far too hot to contemplate going up a hill at speed. In the few hours of break between the two retreats, I ended up showing one of the current monks the old trail up from the solar panels to the top of Hawk Mountain, which has probably not been used much since the 2008 fire – Bryan and I went up several times before the fire to scout, and once after to survey the damage to the old radio transmitter. Crucially, the ropes that were tied to the chamise bushes to help you up the steepest pitches had all melted; I don’t think they were ever replaced. We did not get so far on this occasion.

For the final morning I was there, I had thought about taking an early morning run to the wind caves, such as I had done last summer, but then when the wake-up bell rang, I found myself too sleepy, and indulged the other thought, which was that my body was feeling nicely stretched and relaxed from a week of intensive yoga, and why would I want to subject it to the stress of running before I went back to the city?

Returning to the city, the kind retreatants who drove me and I had the same reaction as we came off the 280 and saw the vista towards downtown from San Jose Avenue: Tassajara was amazing, but San Francisco is also pretty great. I had the same thought on Friday as I set out for a gentle-ish run, earlier in the afternoon than usual, which meant my light lunch stopped feeling so light once I got moving.
It was one of those weather front days , a band of high cloud across the middle of the sky, so there was often a backdrop of blue sky but no shadows, beautiful for photography. I did a variety of familiar little summits, Kite Hill, Tank Hill, Mount Olympus, Buena Vista and Corona Heights. The views were lovely – perhaps not as ruggedly spectacular as from Hawk Mountain, but still inspiring. There was a similar profusion of butterflies around Buena Vista as there had been around the wildflowers of Tassajara. Somewhere along the way, I thought about lines from Dogen:

‘Because earth, grass, trees, walls, tiles, and pebbles all engage in buddha activity, those who receive the benefit of wind and water caused by them are inconceivably helped by the Buddha’s guidance, splendid and unthinkable, and awaken intimately to themselves. Those who receive these water and fire benefits spread the Buddha’s guidance based on original awakening.’ (Self-receiving and -employing Samadhi)

I am not versed enough in the Chinese elements to be able to parse their inclusion in this passage, but what I would say is that moving through the landscape – wilderness or urban – with close awareness, remembering to feel the intimacy of the surroundings, can be a liberating experience.

The view of the 2008 fire, a week before it arrived into Tassajara, from the top of Hawk Mountain 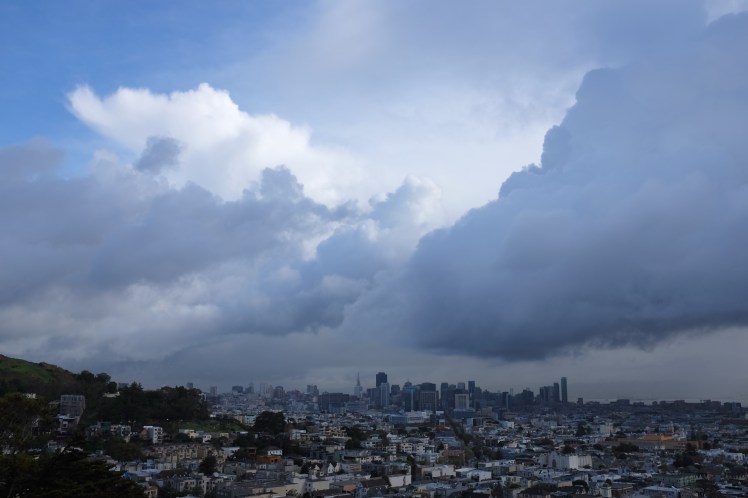 A weather front passing over downtown San Francisco from Kite Hill a few months ago.