Redbuds always make me think of Tassajara, where I first came across them: one by the stone cabins, one by the lower garden, the two ends of the main drag.
Last year, when I came to Wilbur in the spring with the friend who had first introduced me to the place, I was astounded at how many redbuds were flowering in the gorgeous expanses of Cache Creek Canyon on the northern end of Highway 16; I loved how they seemed to suck in all the sun in the surrounding area. Traveling up again last weekend, that highway was closed, as it had been at the beginning of the year, to deal with landslides. The alternative, continuing north on the 505 and the 5 is a little dull, but whereas I was beset by a severe amount of rain the last time I took the Highway 20 pass through from Williams to Bear Valley, this time the hills were soft and green, and there was a lambent light shining down on the redbuds growing by the creeks.

With the clocks having gone forward, and a week of higher temperatures behind us, Wilbur was lovely, and mild into the later evenings. Running up the schoolhouse trail after I arrived, there was a profusion of shooting stars on the banks; on the more exposed trail to the medicine wheel, where I ran on Sunday, lupins and poppies and blue dicks, as well as others that I recognised from Tassajara but did not have names for; on the wide-open ridge trail, there were clumps of Indian paintbrush, some a pale scarlet, some a deep crimson. When I had made it up to the ridge, there was almost complete silence; at first some songbirds nearby, with a few raptors drifting along with the faint warm air, and then nothing but the sound of my breathing and the crunch of my shoes, much like running the cliffs of Cornwall, except with waves of hills in the place of ocean. I was very glad to see one of the sticks I had planted in the ground as a way-marker last time, when I had been coming from the other direction –  once I was over the top of the first of the ridge slopes, it was clear where to go. I could not see all the way across to the snow-topped peaks I had seen last time, and which I had glimpsed from the highway a couple of days before; the clouds were rich and hanging perhaps where they would have been, lit in just a few places by the sun to break up the purple and grey.

It was a weekend of generosity: starting with the gift of the van, once again. A regular benefactor had also enquired how much I usually spent on fuel, and donated that amount. An older couple staying at Wilbur were celebrating a birthday, and shared left-over pizza and strawberry shortcake with everyone who was in the common room on Friday night. Someone else gave me a bunch of watercress that they had picked from the banks of a stream; I passed some of it on to others, while enjoying the iron pepper taste of it, richly evocative of English summer to me.

On Monday it rained again, but only after I had arrived back home; I also felt lucky to avoid the rain on my way to and from work on Tuesday. I hope my luck holds out as far as Sunday, when there is a Roaming Zen scheduled… 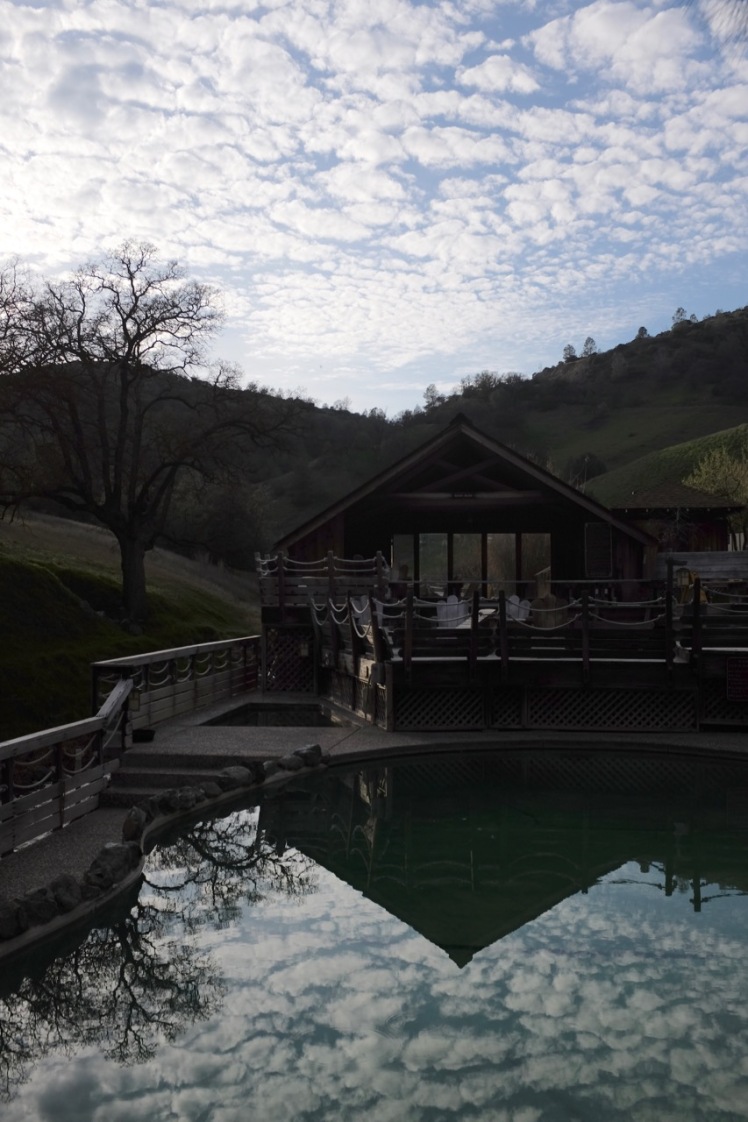 Early evening on Friday at the bath-house.

Shooting stars beside the trail.