It was ninety degrees the day I left San Francisco at the end of September, and ninety degrees the day I after I returned a couple of  weeks ago. My body had already navigated from the pleasant weather of Portugal to the storm-force winds of my last weekend in England, and then across eight time zones, but I could not have asked for better conditions to come back to.

As part of cranking myself back to fitness, the day after I got back I took myself off for a gentle ride down to Ocean Beach, just to remind my legs about pedalling, and to enjoy sweltering; on the Friday morning I took a spin around the Headlands, and found the bridge sitting on a bed of iridescent fog in the low-angled sun. Photographers were having a field day, and I enjoyed the contrasts between the warm slopes and the fresh valley bottoms, where the mist lingered before the sun rose high enough to burn it off.

And since typical weather systems in San Francisco tend to last five days, it was not a surprise when temperatures dropped at the end of that week, something else for my body to adapt to. On the Saturday I ran up to Mount Sutro, and found the usual divide between sun on the lee side of the hills, and dense fog in the woods on the ocean side. On the Sunday morning I intended to ride around the city, but the fog was so damp and pervasive I couldn’t bring myself to do it – remembering that it was exactly a week since I had put off running due to the challenging wind – and instead spent the morning finishing the editing of the thousand or so pictures from Europe. I made up for it last Monday morning, though navigating the rush hour is never completely stress-free, and I had a terse interaction with a driver about speeding through Golden Gate Park, when I would rather have been watching a coyote disappearing into the bushes with a raccoon in its mouth.

The forecast for this past weekend was not promising enough to schedule a roam, much to my disappointment; in the end, there was not so much rain about. I took a run over the southern folds of the city to Diamond Heights and back through the bare slopes of Glen Canyon on Saturday, and headed south on my bike to San Bruno Mountain on Sunday morning, under clear skies both times, the low sun warm, the autumnal breezes fresh.

When I went to join Zachary for the lunch-time sitting last Monday, I found the shadows under the olive tree had got much longer, and for the first time, rather wished I had been sitting in the sun, as the wind was a little fresh (not enough to actually move to a different cushion though). The shadows will be an hour further along when we are sitting today, and hopefully the sun will feel pleasant. If you are local, you are welcome to come and join us, and every dry Monday over the winter. 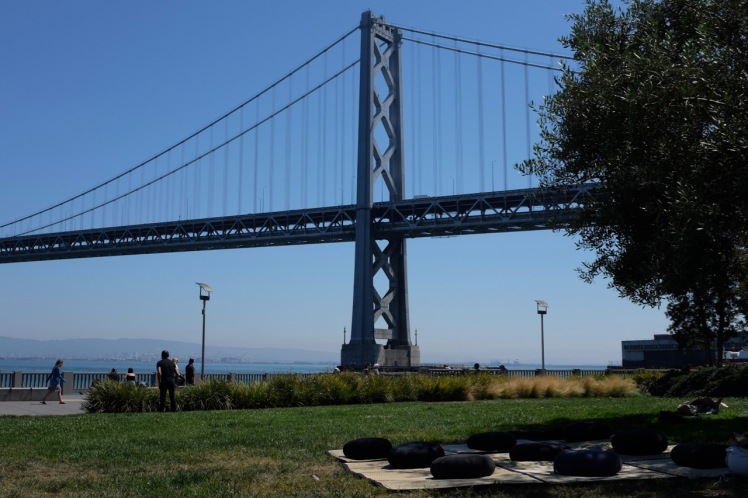