‘Before we open our mouths, we are already expressing the big existence, including ourselves.’ (Zen Mind, Beginner’s Mind)

I have posted this before (with a snarky comment attached), but it is another phrase that we can hear again and again without exhausting. What is it that stops us from really believing it, right now?

‘People think they’ve failed when something doesn’t work out the way they expected it to work out. But most things don’t work out the way we expect them to.
That’s not to say that we shouldn’t try to make things happen the way we want them to, or even the way we hope they will. But we can’t expect that they’ll happen that way. We constantly have to take another look at the situation. Maybe something didn’t happen because it wasn’t the right time. Maybe something didn’t happen because the right people hadn’t come together, or maybe the circumstances weren’t right… The world always unfolds in its own way.’ (Instructions to the Cook)

This is another book I re-read while preparing for my Tenzokyokun class at Zen Center; Tetsugen Bernie Glassman was using Dogen to illustrate how he got many zen-infused projects off the ground, which some of the participants in the class are also keen to learn.

I haven’t shown any photographs publicly for about two and a half years; I had three shows right around the time I left Zen Center, but I did not come close to recouping the printing and framing costs, so I put that aside and focused on trying to earn a living in the market-place. Recently I enquired as to whether there was a free upcoming slot in Zen Center’s monthly shows, and was told that the artist originally scheduled for July had canceled, if I would like to take their place.

So, I will be exhibiting some recent photos in the Art Lounge at San Francisco Zen Center for the month of July. The title of the post is the title of the show, from the Sandokai:

Each of the myriad things has its merit,
expressed according to function and place.

Please come and take a look if you are in the area. There will be an opening reception on Friday July 6th from 7:30 – 9:00pm, and it would be lovely to have your support. 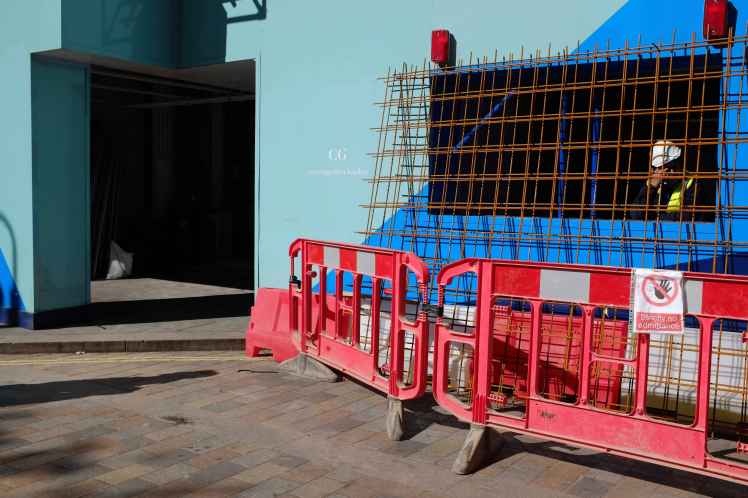 Quite a few of the photographs in the show are from visits to England, including this one, of construction at Ealing Broadway station.

‘The great road has no gate. It leaps out from the heads of all of you. The open sky has no road. It enters into my nostrils. In this way we meet as Gautama’s bandits, or Linji’s troublemakers. Ha! The great house tumbles down and spring wind swirls. Astonished, apricot blossoms fly and scatter – red.’ (Quoted in Shobogenzo Henzan -All-Inclusive Study)

Researching for my dharma talk in San Rafael last week, I came across this quote of Dogen’s teacher –  so vividly alive, I feel it should be a poem.

I live just a couple of blocks from the Castro Theater in San Francisco, so for Pride, my neighbourhood is even busier than usual. Knowing that there would be late-night parties happening both downstairs and next-door, I was in the East Bay for much of the weekend for the sake of getting some sleep, but came into the city both days, and riding on BART seemed like a huge, high-spirited fancy-dress party.
Many of the rainbow-hued crowd seemed to be of school age; I wondered whether for some of them Pride was much different from Hallowe’en, a chance to dress up and enjoy participating in a massive event. At the same time it seemed clear that many of them were coming in support of their LGBT friends, and I reflected back to when I was that age, and there was way less support of difference (it was not until my college years that my horizons were broadened more towards tolerance).

I have only marched in the Pride Parade once (you can read about it here) and I remember the grumblings of some older gay residents that Pride had been taken over by straight people. I have been mindful of this since, and since I hold many overlapping positions of privilege, it’s not really my place to expound opinions about this. My main feeling from the weekend, though, was that having so many people coming together to celebrate difference can only be a positive thing. It seems to typify the critical mass of social and cultural progress that has been made in my lifetime, and I imagine that this is why so many people I know are so dismayed by much of what the current American administration represents, as it seems to be trying to drag society back to that less inclusive time and way of thinking.
From my dharma perspective, I mainly want people to stop suffering, and was strongly reminded of hatred or anger as one the three poisons which are the causes of suffering. When crowds of people come together and meet each other in the absence of hatred or anger, it can only be beneficial. 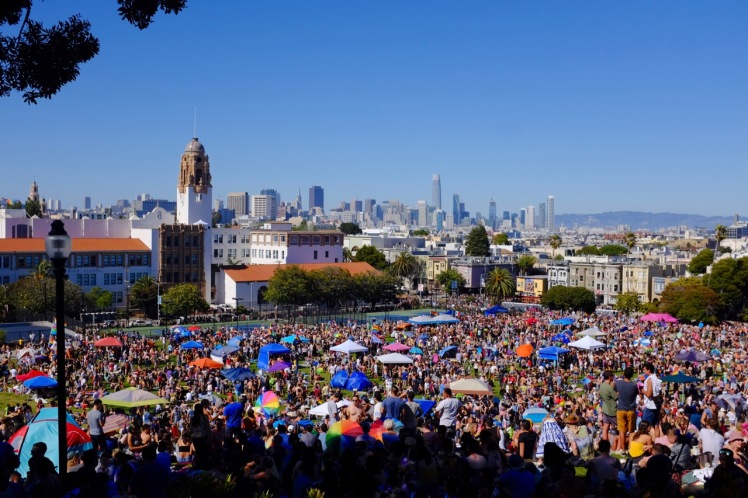 I passed by Dolores Park on Saturday afternoon, where the heatwave helped draw a huge crowd. I found this wonderful picture online, of a Pride gathering in the Castro in the seventies.

‘Buddha-nature is not a precious antique to be wrapped up in brocade and packed away in a box. Our buddha-nature reveals itself clearly in our daily work. That is because buddha-nature is act, activity.’ (Talks on the Ten Ox-Herding Pictures)

From long ago
I have been coming along,
never arriving.
Even the old have far to go:
for that is the way with this Way.

‘As long as you regard yourself or any part of your experience as the “dream come true,” then you are involved in self-deception. Self-deception seems always to depend on the dream world, because you would like to see what you have not yet seen, rather than what you are now seeing. You will not accept that whatever is here now is what is, nor are you willing to go on with the situation as it is.’ (Cutting Through Spiritual Materialism)

‘When we include everything in our understanding, we are more cognizant of the intrinsic value of each thing, and we are more aware of the place each being or event has in relationship to us. We don’t exclude anything, recognizing that everything is already present. Accepting things as they are is predicated upon knowing that the present includes all those things we want and those things we don’t want. We cannot reject anything merely because it causes us discomfort of does not fit our idea of how it should be. Our suffering arises from this overlay of likes and dislikes, but truthfully there is nothing obstructing the fully realized moment because nothing is excluded and all things arise simultaneously.’ (Being-Time)

This was another book I took out of the Tassajara library while I was there, though I didn’t have time to get very far through it. I have heard Shinshu talk on Dogen’s fascicle Uji before, and it seems she has been honing her material as the book has slowly come together. I look forward to reading the rest of it.

‘If you want to be aware of yourself – what you are, who you are – you have to sit on the cushion in uprightness, in straightforwardness, in honesty. That attitude in life is called calmness, peace, tranquillity. It is not a static attitude, lacking in dynamic movement. This attitude includes both static and dynamic movement.’ (From Wind Bell Vol X no. 1)