‘The four elements return to their natures just as a child turns to its mother;
Fire heats, wind moves, water wets, earth is solid‘ – Sekito Kisen

For various scheduling reasons, it is three months since I have been to Wilbur, and I was looking forward to going again, knowing the the spring greens of my last visit would have been transformed into the dry heat of summer. A week or so ago, it seemed as though the Pawnee fire, which was burning fiercely a few miles up highway 20, was going to disrupt my plans. I had a message from Wilbur on Tuesday saying that they had evacuated everyone. Knowing how long evacuations had been in place at Tassajara, I started wondering what else I might do with the weekend. Then on Thursday, news that the fire had been contained enough for the hot springs to re-open to guests, so I arranged everything back again. I had reports that it might be smoky, and figured I had probably been through worse at Tassajara.
In the end I arrived to radiant blue skies, intense light and heat. As I often do these days, after unpacking I made my way to the little tub by the fountain of life, and lay there absorbing the peace and quiet. Dragonflies were perched on the tallest stalks of grasses around the tub. I remembered four summers ago, lying in the creek at Tassajara not long after I had driven in, and watching a dragonfly dipping in the water; the simplicity of it told me I had arrived, and also gave me a way into the talk I was due to give.
It turns out that it was very quiet; many of the guests had obviously decided not to come despite the  re-opening. One nice thing about that was for once having time to talk with Gina and John, regular bodyworkers who also offer yoga and tai chi respectively, who I have met many times, but usually only briefly.
After dinner the sun, about to set, was shining right down the creek along the bathhouse, so of course I scrambled down to take pictures, and then soaked a little as the bats started to dip into the pool. It was still almost 90 degrees and the deck was still radiating the day’s heat. There were no mosquitos or biting flies. It could not have been more relaxing…
On Saturday morning I was awake with the first of the light, and made it out for a run up to the medicine wheel. Even though the sun was only hitting the tops of the hills, with a fullish moon setting above them, it was already 70 degrees. The temperature quickly rose over 100, though the breeze continued through the day to give some illusion of freshness. We did tai chi on the bridge with John after breakfast, and then most of the same people came to sit with me on the yoga deck.
It was hot enough that doing nothing was a great pleasure, as well as a luxury. I did not even read; I was focused on minimising inputs, just allowing myself to watch the squirrels and the birds variously frolicking, and being mesmerised by the trees around the bathhouse.

The first sign of something amiss was around dinner time, still in the high nineties, when we could see a plume of orange and grey cloud rising to the west. I remembered this from 2008 at Tassajara, the ferocious heat and stronger winds would cause the fire to gather pace in the distance, we would get all excited, and then it would die down without getting any closer – until of course it did.
The next sign was on Sunday morning, when the wonderful crew who take care of the cabins and the grounds, Ana and Nellie, Oscar and Juan, did not arrive from Williams as they always do. After tai chi, we were asked to gather in the office: the plumes we had seen were the fire coming closer to highway 20, so that was now closed off to traffic coming west – the crew had been unable to leave Williams. There was also a large fire alongside highway 16, the way I had come in on Friday, so that was now closed as well. With the weather due to be as hot again, it was suggested that we leave, not from any imminent danger, but to ensure we didn’t get caught out by any more road closures. I still offered my meditation at ten, and then ate, bathed and packed up. Smoke was again visible in the same place to the west, a ghost in the endless blue sky.

Having driven the unpaved Bear Valley Road, and checked in with the highway patrol at the 16 junction, I had highway 20 to myself for the fifteen miles to Williams. Driving south in the Sunday traffic I usually manage to avoid, I could see many columns of smoke rising in the hills all the way down to Winters near Lake Berryessa, and a pall drifting down to the Bay Area. The California fire season is underway… 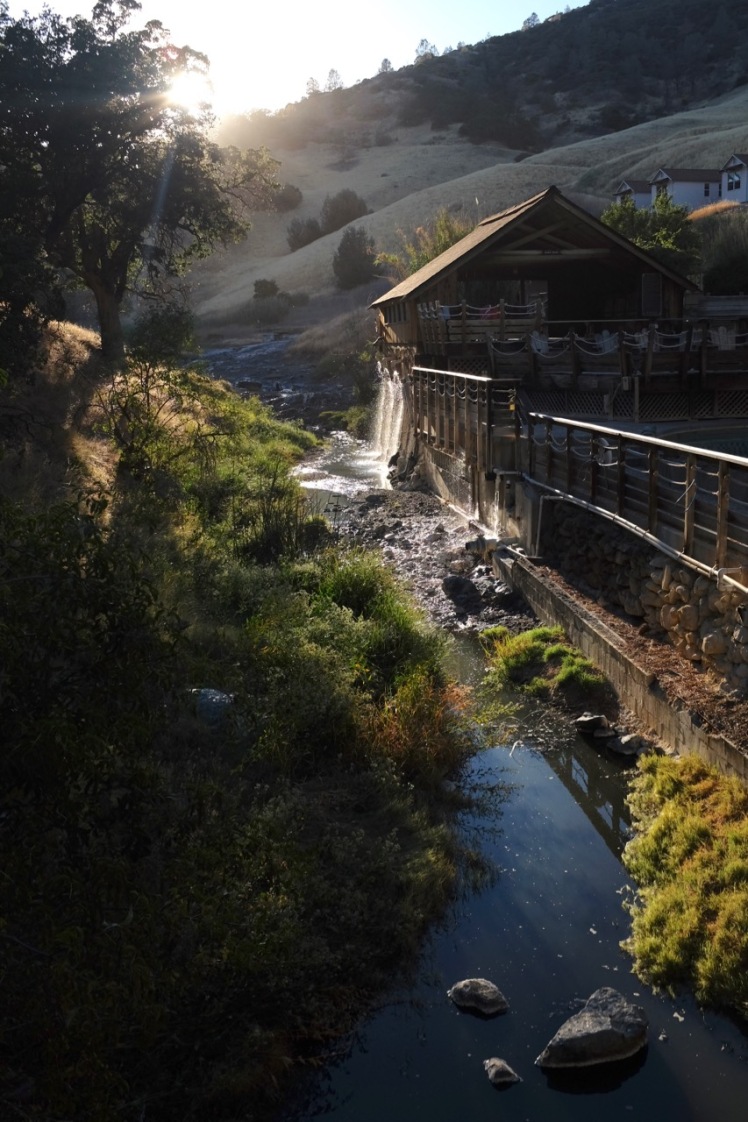 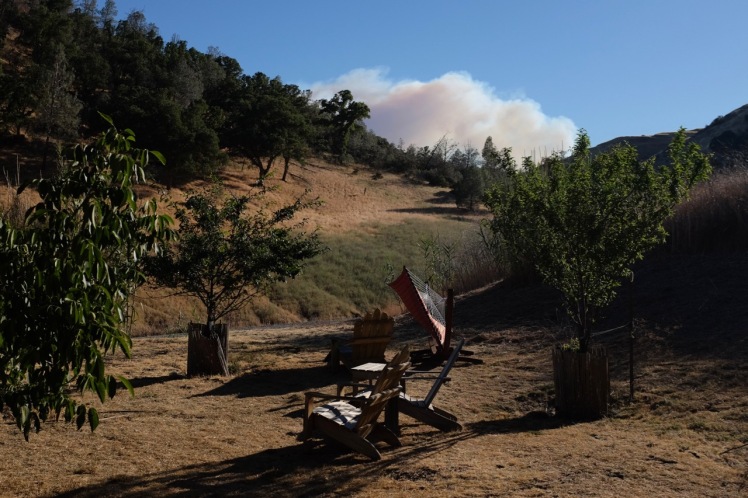 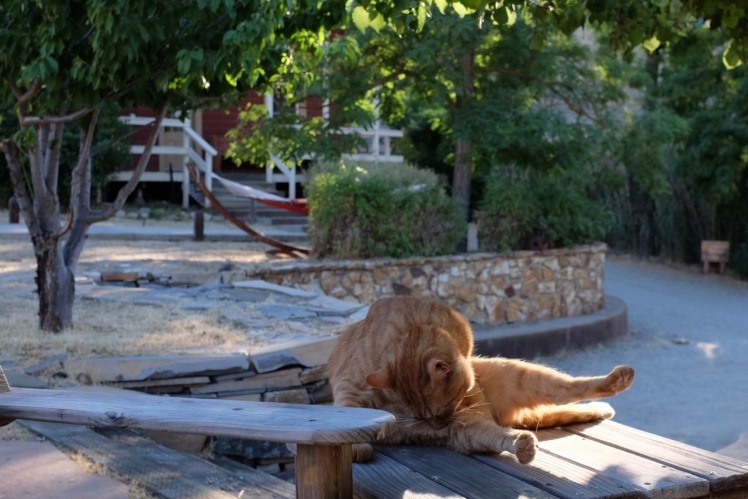 Frank the Wilbur cat bathes in his own feline way.

Smoke from the County fire visible from the 505 on Sunday afternoon.