I was thinking of Hongzhi’s phrase ‘like spring arising in everything’ as the title for this post while I was driving up to Wilbur on Friday. The sky was mostly optimistic blue with bright clouds, there was a sense of burgeoning, with the luminous greens of the hills, and, in the Capay Valley, not just endless almond trees in blossom, but also bright carpets of blossoms under the trees. The redbuds were not quite there, and the creeks were running fiercely; on the hillsides there were gullies running, and signs of slides everywhere. I felt like I was done with the rain, that I had got good value out of my rain gear this winter, but it was time for spring.

I knew the forecast was not as hopeful as I was – Saturday was drear, and it rained or drizzled most of the way through the chilly day. And then Sunday was the same, until the afternoon, when the wind started to pick up from the east, and the sky started to clear. I ran on Friday afternoon, up the waterlogged trails, my first run in almost three weeks and I felt a little rusty. That night my occasional foot tendon pain flared up into a constant throbbing that impacted my sleep; I might have been tempted to run again, even at the risk of further injury (I had barely noticed while I had been running, though I was stiff afterwards) but I hadn’t brought a rain jacket to run in. Instead I read and rested, and since I had some writing to do, took care of that, and editing the many hundreds of photos from the Mountain Seat weekend.

I was totally thrown by the clock change on Sunday – I knew it was coming, but had not realised it would be that weekend. My watch said one time, my laptop another, and the three clocks at Wilbur disagreed with each other. I remembered a time when I had been in Istanbul by myself about thirty years ago, and was flying back on the day I knew the clocks were going back in England. My Turkish wasn’t good enough to find out if it was also happening there, and the people who could speak to me in English weren’t so sure themselves, so I just left for the airport several hours ahead of when I needed to, just to be sure.
Luckily I had it straightened out this time before the morning meditation, though a couple of people who had intended to come ended up missing it. Since I had Shinshu’s book with me, I took the opportunity to talk about Uji at the end of the sitting, though I don’t think Dogen said anything specifically about daylight savings. I had good numbers of people coming all weekend, and mostly very solid sitters. I hope that the next time I am there, at the end of April, it will be warm enough for the screens to be off the yoga deck. I might have missed the redbuds though.

On the way out the road was as treacherously slick and muddy as I can remember it, and there was one last downpour as I headed south on Sunday evening, with the later evening light feeling like another release from the long winter (I know people who have real winters will be rolling their eyes).
By the time of the Monday sit, there was unbroken blue sky for the first time in many weeks, and it was lovely to sit with the sun warming my back. I noticed, riding home, that the west wind, itself a harbinger of summer, had picked up, slowing me down. 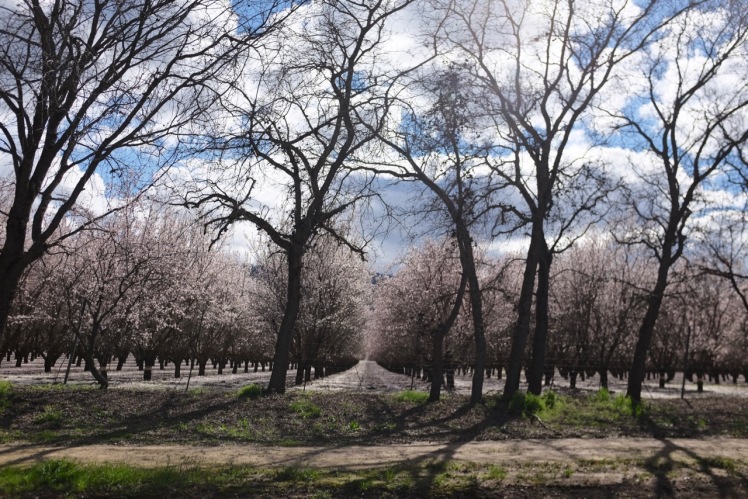 Compare and contrast with just a few months ago.