In this year of mutable weather, I was not especially surprised that it was cooler during my visit to Wilbur last weekend, than on the previous one. The high cloud covering the Bay Area gave way to pale skies and puffy clouds as I left the freeway and took the back route from Fairfield to Highway 16, stopping at the Full Belly Farm shop on the way, and seeing the traces of recent fire around Rumsey.

Since it was only eighty degrees when I arrived mid-afternoon, I went for a gentle run up the valley and over the creek, not having run since I was last there – it felt okay, and my new shoes probably helped. Having spent the first part of the day in the city wavering as to whether going for a short bike ride would be a good idea or would just end up making me feel rushed as I tried to get out of town,  I was glad to get some exercise in.

The times of the sits had been adjusted to deal with the summer weather, which was great, and worked well, but also left us vulnerable to flies and mosquitoes, especially the 7pm sittings. At 9am, there was a freshness to the day that felt very conducive, and I was surprised how many people were up and about and willing to sit.

On Saturday it nudged ninety, but since there was a pleasant breeze all day, I set off around noon on one of their bikes to finally get some pictures further up the Bear Valley Road, which I had visited last year on a run. It was lovely to see that again, and a nice little work out, which meant I didn’t need to push myself to run early on Sunday. I left mid-morning for an event that I will post about tomorrow.

There was some late drama on Saturday – I was just chatting with Terrye in the office before turning in, when a guest told me there was a baby rattlesnake on the steps close by. Terrye did the pick-up of the tiny little thing with the long-handled picker, and put it in the special snake box (at Tassajara we just use a ten-gallon bin); I volunteered to take it down past the gate in a cart and release it – it seemed entirely disgruntled by the whole process, and I can’t say I blame it.

The view up to Cache Canyon from Full Belly Farm.

Traces of the recent fire by Rumsey.

I probably have pictures of these hills from all seasons now. 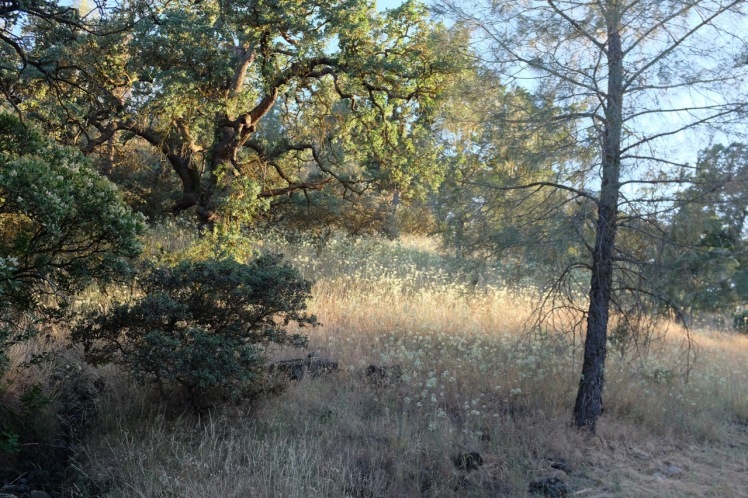