The invitation from the Dancing Mountains group was to come and sit shoulder to shoulder with them, and that’s what I did over the weekend.

I had a split night of sleep on Thursday (and again on Friday), and started the day with a rush hour tube train through central London. After that, things got much more relaxing with a train through East Anglia, through several stations I associate with places where my uncle used to live – I had hoped to see him this time, as I did on my visit to Carol and John’s last year in the same part of England, but he was traveling.

I was very encouraged to arrive at the venue after lunch just as both Carol and Rebecca were pulling into the driveway. After some hugs and catching up, we began to transform the Christian-themed place, a lovely building, solid and familiar with its red bricks and tall gables, setting up a sweet zendo for twelve in an upstairs lounge, and arranging the sitting room chairs downstairs and the dining room tables to accommodate everyone.

As people arrived, the rain that had been threatening all day finally passed through – the first I have seen since the end of May. We got settled, had the first of our delicious meals, and moved into silence with two evening periods – though I was being sucked under by sleep and did not enjoy them much.

The schedule managed to pack in sixteen periods of zazen before Sunday lunch, which really helped everyone get quiet together. I had sat with eight of the group before, and there were three new to me, one of whom was unused to the amount of sitting, but stuck it out well. I offered a talk on Spiritual Friendship – the theme for the retreat, so there was a request that I speak to that – and I felt that I stitched my thoughts together reasonably enough.

We had opened all the windows on arrival, as the place had been a little stuffy, and a chilly north-easterly breeze made its presence felt on Saturday; Sunday was much warmer and sunnier.

A discussion had been scheduled for Saturday afternoon (as well as the Dancing Mountains AGM for Sunday morning), and over tea and biscuits, people shared honestly about their own practice, and how it felt to be practising in the UK. For those who had spent time at Tassajara and Green Gulch, the issue seemed especially poignant; from my persective I pointed out that English tea-and-biscuits zen, which I have experienced in the groups in Brighton, Hebden Bridge, and last year in Glastonbury, has its own wonderful flavour. There is an ongoing wish for more practice opportunities, and questions as to what shape that will take. Along with a few other teachers – now including Djinn who visited Hebden Bridge for the first time recently – I will do what I can to help.

For this occasion, though, after our sitting and our sharing, and a final meal together, forty-eight hours after setting it all up, those of us who didn’t have to travel across the country stayed on to return the place to its former state, leaving no trace, before our fond goodbye hugs. And at this point I have to thank Wendy and Carol especially for inviting me and doing so much work to make the retreat not just happen, but be a great success.

Since I had hoped to stay with my uncle, I had arranged my next stay, down on the South Coast, to start on Monday, so I had ended up taking an Airbnb in Newmarket. It was nice to have a little time to explore the town; I had looked on the map to see if there was anywhere I could run, but hadn’t been able to parse the open spaces. I discovered, and perhaps should have guessed, given the town’s strong association with horse racing, that they were training gallops. In the end, walking them in the afternoon sunshine felt more appropriate for my energy levels, though if we visit again I will do my best to fit in a run on the sloping grass and tracks. It was a lovely outing, the only disappointment coming when I found the supermarkets had closed at four; it is a while since I have been anywhere where that happened.

Our venue for the weekend.

The zendo was equipped by different sanghas. 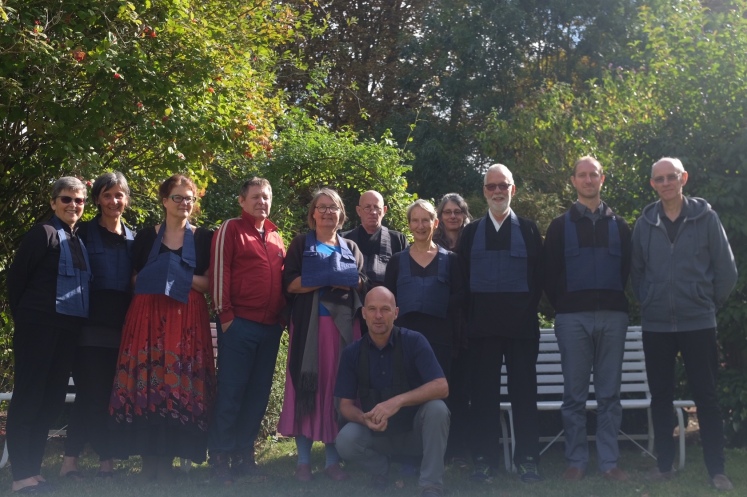 The participants for the weekend. 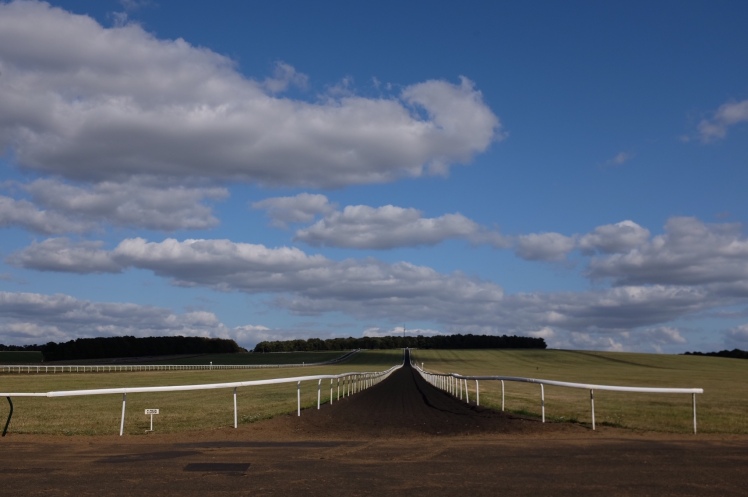 The training gallops on Side Hill.