Today marks twenty years since I first came to San Francisco. On the flight over from New York I had been chatting with the cabin crew, and, in the days before BART ran to the airport, happily accepted the offer of a ride into town on their shuttle. They were all staying in one of the big hotels near Union Square; I mainly noticed that the address was on Mason St, the same as my hotel, and decided to walk on to my destination. Which was my introduction to the hills of San Francisco, as the gradients of Nob Hill did not feature on the map I was looking at.

After dropping my bags off, I walked up Columbus Avenue, had a coffee, and found myself wandering unexpectedly around Chinatown, quickly forming the opinion that San Francisco would be a nice place to live, without realising that the next day I would meet the person who would change my life and make all that possible.

So I have a residual fondness for November sunshine – not the strong heat that lingers through October, but some bright hours, with the temperature dropping quickly as the day draws in. It was warm enough that time to visit a beach on one of the afternoons I had a bicycle rented…

It was nice to get roaming again on Saturday. The morning fog had lifted around eleven where I live, so I anticipated an afternoon of sun. I was thus a little surprised to be approaching the start point, not far from the Golden Gate Bridge, and hearing the fog horns.  Even though sitting on a foggy beach has its charms, I was wondering about how short a loop I was planning on walking, and decided to add in the little section of trail that runs above the National Cemetery.

The participants had all roamed before, and it ended up being a chatty afternoon, interspersed with sitting not just above the military graves, but also by the old merchant marine cemetery. These days, the dunes there offer a sense of the original landscape of the western half of San Francisco, but not so long ago, there were Nike missiles on the ground…

Amazingly, by the time we had gone along the Lobos Creek trail, there was no fog to be seen – Baker Beach was clear and sunny, and so was Marshall Beach, once we had climbed over and down the new trail. With the extra loop we had hiked, and with one of the participants wanting to make a quick get-away for an evening appointment, we did not linger as much as I had originally intended. The imminent sunset had brought quite a number of people to the bluffs, and once back at the top, overlooking the bridge, we also had a view of the fullish moon rising over downtown buildings reflecting the last of the sun. And then by the time I had ridden home, it was dark and chilly.

The next morning I rode over to Tiburon to take in the Paradise Drive loop. In years gone by, this would have been a relatively short and easy ride for me, just over three hours usually. Where my form is right now, it felt like a good solid spin to gauge how I was doing. The mist was high, and I wore several layers to stay warm, still early enough that riders and runners outnumbered cars out and about. Approaching Sausalito on the way back, I was worried that my legs were getting tired, but they did okay, and I had no residual stiffness afterwards. By the time I got back over the bridge, the sun was out, and the rest of the day was lovely.

Conditions for sitting on Monday were also pleasant, though the shadows get longer every week. We had a good group again, with some of our regulars bringing a work colleague for her debut. I still can’t shake off a little sleepiness over the course of my sitting, and when I went back to the company we had been drawing graphs of wakefulness, a little while later, my graph this time was the one that dipped lowest… 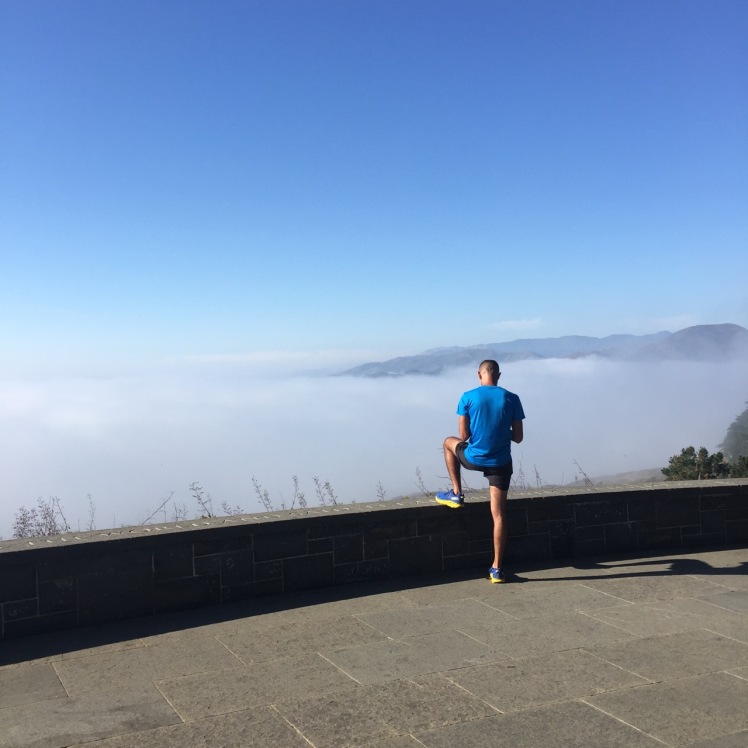 At Immigrant Point in the Presidio, prior to the roam with fog on the water.

I do love this little stretch of woodland trail near Rob Hill.

The fog reached through the bridge as we sat by the National Cemetery. 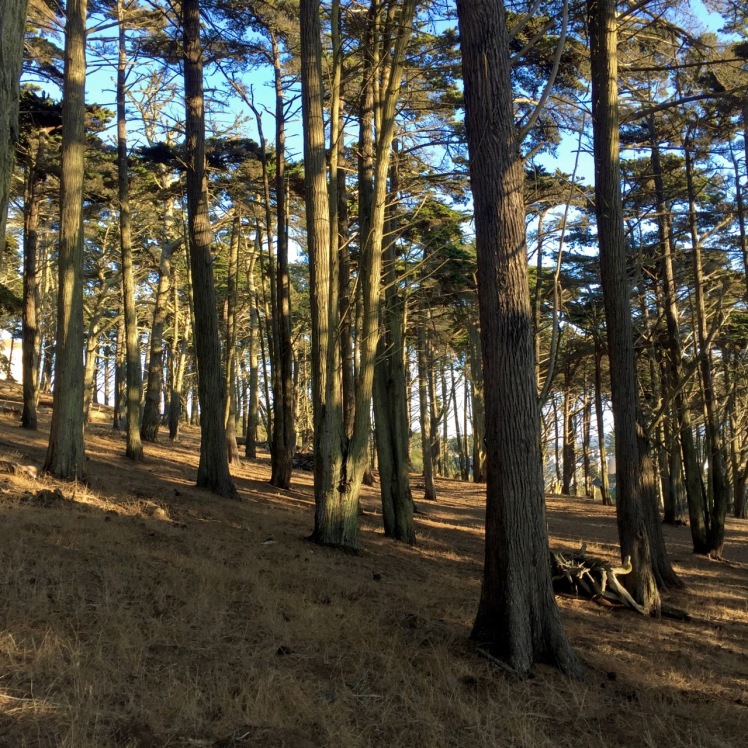 The hillside above Lobos Creek.

Looking down at Marshall Beach, with the fog nowhere to be seen.

A line of pelicans flying over the bridge. 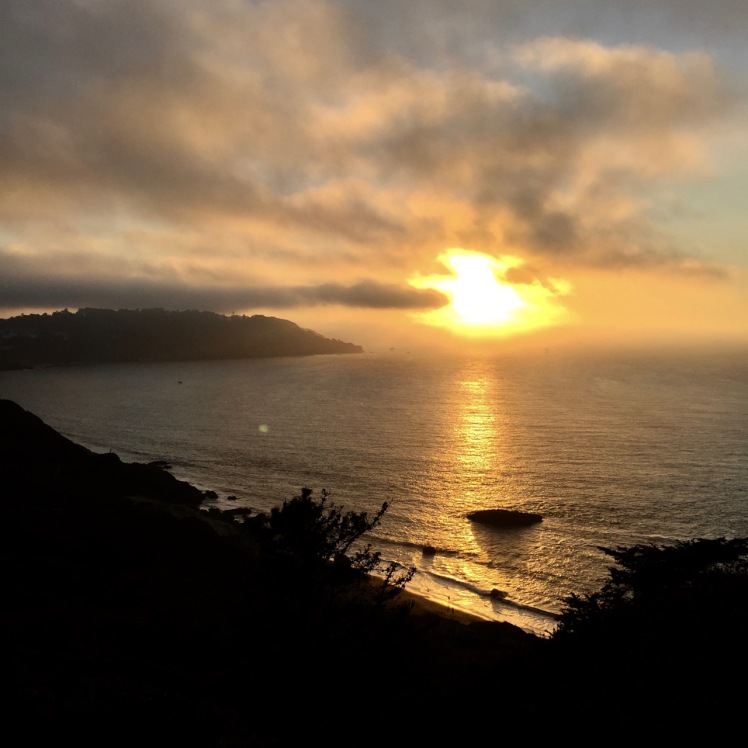 My iPhone does not really do well with sunsets or other intense counter-light. 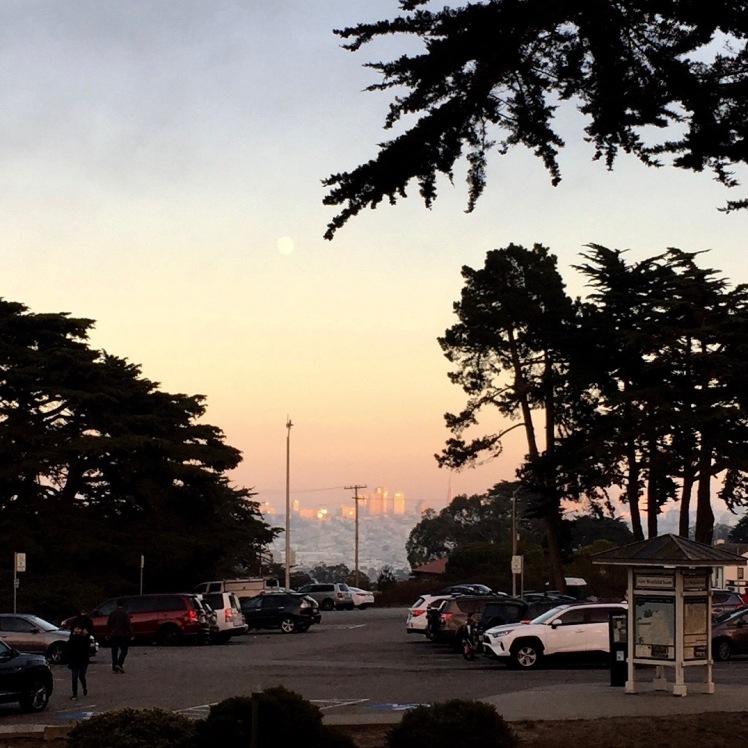 Looking back to the city with the moon and reflected sunlight.

Settling down to sit on the Embarcadero on Monday.