I have wondered a few times this week, how people would have responded if they had been told at the beginning of the year, how things would look now, six months later. I imagine many would have run away screaming. And yet here we are. We are living history, as we always are, but more acutely now, with no sense of how this will all turn out. How will things look at the end of this year? Would I run away screaming if I knew?

This week has been pretty exhausting for many in this country. I feel relatively sheltered, as I have also mostly felt through the pandemic so far, but the energy is strong, and is impossible to ignore.

As I have been teaching, these past three months, there have been shifting flavours, as we navigated new realities, started to get used to them, and then started to chafe. And now the outpouring of outrage lands on top of that, and pushes everything in a new direction. Words that seemed to fit a couple of weeks ago are now inadequate; so what can we say now?

This week I had four virtual teachings: two on Monday, with my student’s biotech company, and then with the Core folk on Instagram; with my students on Tuesday, and with Hebden Bridge on Wednesday. Thanks to the ongoing sessions for Core Studio, and also the weekly conversations with the Hebden Bridge group, I have been getting better at speaking more extemporaneously, and trying to find words to help people find ways to practise with everything that is going on. It felt very tender to be in the dharma seat trying to help, and I know that is one of the contributions I can make.

There is also the delicacy of speaking from my privileged position of shelter, in a week where the request was to let the voices of people of colour come to the fore. I found myself looking back at articles I had read from wise people writing after the election, and of course the issues were being raised then – as they were being raised after Ferguson, after Katrina, after Rodney King, back in the sixties, and long before. Can we believe there is really an inflection point happening this time?

I feel freshly inspired by the people who have inspired me before – Rev angel Kyodo williams, Lama Rod Owens, Ijeoma Oluo, Roxane Gay among many others – who are stepping up again to say things they have been saying clearly and fiercely all along, in ways that must be exhausting for them. Taking my cues from how social media has reacted, for all that it sometimes feels performative, I have been happy to highlight words of wisdom, new and old, that speak to the systemic oppression that is woven into the fabric of the US, and that I know I benefit from as a white male with all my privileges intact.

Riding my bike on a windy morning on Friday, I thought of the various times I have encountered violence or the threat of violence, in particular an incident a year or two ago when I was threatened on a BART platform. I was shaken for a day or two by the words that were shouted at me with menace, but I was also aware that it was an isolated occurrence for me, and not the kind of stress that I have to endure as part of my daily life, as people in many communities do. As such, I am not not going to pass judgement on those who endure such violence, and have throughout their lives, and who are now responding as they see fit.

On Wednesday I went down the street to Dolores Park, where there was a large protest. I stayed on the edges, as I still have no desire to get sick, but I still got to enjoy the enormous feeling of solidarity in the huge crowd – as I remember from demonstrations after the election. I left after a while – unable to hear the speeches with the helicopters overhead – and intended to ride over to Rainbow to get food. It was then that I discovered the march was coming right up my street. I couldn’t even attempt to cross the street for twenty minutes. When I did get my bike across in a slight break in the crowd, I navigated around all the closed streets and stalled traffic, and then discovered that I was only just in time: Rainbow was closing at six pm due to the city-wide curfew… This is our life here now.

The scene in Dolores Park – there were thousands on all the blocks leading to the park as well. 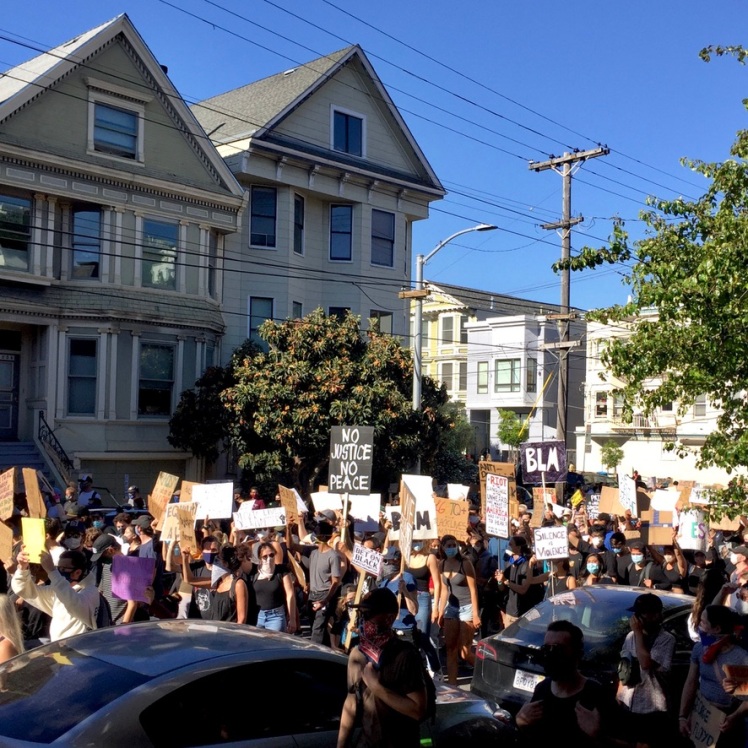 Right by my front door.