At the beginning of the year, it looked like I would have a conflict this week. One of my students had pencilled in August 8th for his wedding, since it is an auspicious date, and had asked me to officiate. The plan was shaping up to be a long weekend for many people up in Mendocino.

And I knew that Shohaku would be offering a Genzo-e at Zen Center, starting on the 7th. Even though I would have already attended the weekend in London with him in March, I definitely wanted to participate, as I am such a fan of him and the format.

Both of the events took place, but of course not as originally planned (and the London weekend was cancelled…). In the end I decided that I did not want to clear my schedule to attend an online version of the Genzo-e from home, though I hope to be able to listen to the classes at some stage. And the wedding transformed into a socially-distanced event for families and a handful of close friends at a property outside of Santa Cruz that my student moved out to a couple of weeks ago, since his work did not need him to be present in the city.

That cautious driving extended to my initial few miles on the 280 as I left the city. It reminded me of leaving Tassajara at the end of a practice period, when running was the fastest I had moved for three months, and suddenly, after a slow hour driving over the road, we accelerated down past Jamesburg as soon as the road was paved. There was an adjustment period for the unnatural to become acceptable.

I was also, this time, paying a lot of attention to my surroundings, as the 280 threads through most of the routes I have been riding this year, both close to the city, where I used not to be able to recognise the streets the freeway cuts through, and down the peninsula, where the names on the exits now had familiar gradients and qualities, and I could spot each sub-division along the way.

There was plenty of weekend traffic, but the southern end of Skyline, past Jikoji, was free and clear (and I remembered the very gruelling ride I took back from there at the end of a YUZ weekend). I stopped for a breather at the spot where I officiated a wedding last year, with the glorious views of woods and valleys, and made it to my destination right on time.

The event was being handled by friends and the owners of the property, who were all very gracious and working hard to make everything happen. I set up my altar, and once I had my robes on, was just there to help the bride and groom stay grounded before we got underway – a few moments with the redwoods helped with that.

It was a very personal ceremony, especially their vows to each other, for the small live audience and the hundred-plus following on a livestream. Watching so much love being expressed, not just between the couple, but from everyone present, is a complete tonic. Afterwards we ate in a large circle on separate tables, with beautiful kora music as an accompaniment.

I made my excuses so that I could drive home before it got too dark, and was rewarded with a spectacular drive, again with sun-filled tree-lined hillsides stretching off into the distance, and post-sunset clouds and mist as I came back alongside the reservoirs I have ridden beside so many times this year. Even when things don’t go as planned, they can still be perfectly beautiful. 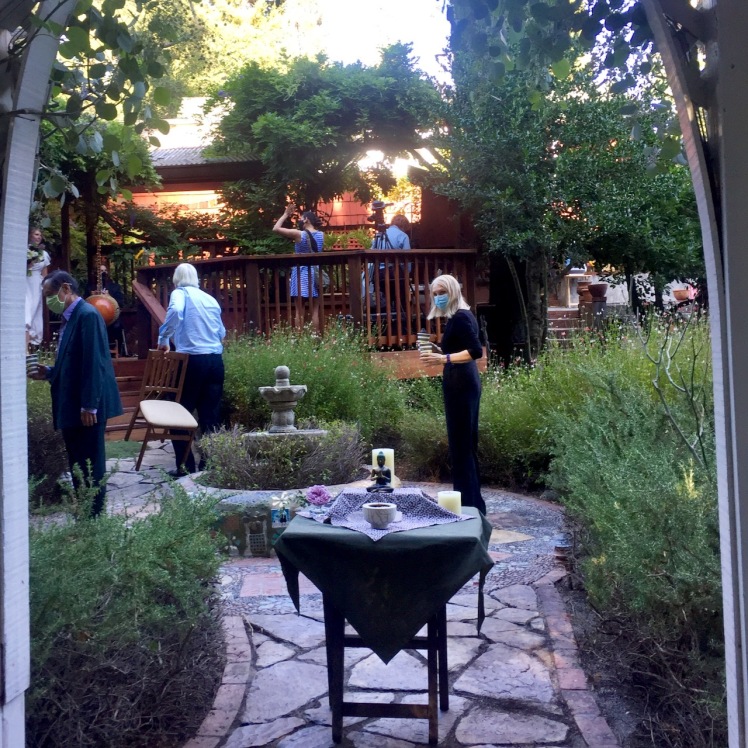 Finishing touches before the ceremony.

After the ceremony, the couple greet friends who have been following online.

Eating at a safe distance.

Spectacular evening colours on the 280, with the fog bank looming.