‘Dogen Zenji says that the practice of zazen is identical with enlightenment.  Let me give you an example. If you clean your room, you think that your room is beautiful and neat looking.  It is natural that you should think so.  According to Dogen, however, who maintains that practice is identical with enlightenment, the very act of cleaning is identical with cleanliness, purity, and beauty.
Another example is hitting the drum.  The moment that you hit the drum, a sound appears: “Boom!”  Hitting the drum and creating the sound are identical.  Let us apply this to zazen.  Imagine that in sitting meditation some sound appears:  “Boom!”, which is enlightenment itself.  But, as with the drum, or bell, sitting and the sound of enlightenment are completely one.  The same principle is exemplified by switching on the electricity:  the electricity does not think, nor is it excessively proud of its great powers.  It never thinks whether it works slowly or quickly.  As soon as you turn on the switch, the electricity works immediately.  The same holds true when you hit the bell.  The bell doesn’t think:  “Wait a minute”, or, “Oh, yes, you hit me.  OK Just a moment.  Let me have a little time, please.  Yes, right now, yes.  Let’s start.  Gong!”  The bell never thinks so.  The moment that you hit the bell, it works immediately.  This is what Dogen means when he says that practice is identical with enlightenment itself. This is the proper way of zazen.’

‘Yunyan asked a monk what he was doing. The monk replied, “I’ve been talking to a rock.” Yunyan said, “Did it nod to you [indicating that it understood you]? When the monk didn’t reply, Yunyan answered for him: “It nodded to you before you even said anything.”‘

Here’s a koan I can definitely relate to.

‘The song of bamboo is beautiful, but it doesn’t appear alone. It is waiting to meet with the spring wind.’ (quoted in Embracing Mind)

Walking along
I followed the drifting stream to its source
But reaching the headwaters left me stunned
That’s when I realized that the true source isn’t a particular place you can reach
So now, wherever my staff sets down
I just play in the current’s eddies and swirls.

‘Yes, my bones know the absolute life, unencumbered by labels, fixed perceptions, and appearances. But the absolute life has never been the problem I have to face in the world. In this twenty-first century, many have agreed that race is a construct or illusion used to create racism. It is also acknowledged in some places that sexuality and gender comprise a continua between opposites, and are not fixed states, as was once assumed. The very words “women,” “men,” “male,” and “female” are being transformed to include the many genders between those polarities. However, simply knowing race to be constructed or an illusion does nothing to change the mind saturated with hatred. To know that there are many ways to live sexually, with or without a prescribed gender, does not affect the extent to which one might be tortured or killed for doing so. Hatred remains potent whether directed at a construct, an illusion, or at the reality of others. Therefore, identity should not be dismissed in our efforts toward spiritual awakening. On the contrary, identity is to be explored on the path of awakening. Identity is not merely of a political nature; it is inclusive of our essential nature when stripped of distortion. In other words, identity is not the problem, but the distortions we bring to it are.’  (The Way of Tenderness)

Along with Being Black, The Way of Tenderness was another book from my friends’ bookcase that I was keen to delve into. Even as I start to feel more assured in my role as a teacher, I am keen to look for ways that I can learn, and Zenju’s deep perspectives on identity and awakening have set off much contemplation and reflection in me.

‘Those who meditate in silent stillness regard silent stillness as final, but it is not something to finalize in stillness. Those who assert mastery in the midst of busyness are satisfied with busyness, but it is not something to be satisfied with in the midst of busyness. Those who learn from the scriptures consider the scriptures basic, but it is not learned from the scriptures. Those who work with teachers and colleagues regard this as a profound source, but it is not attained from working with teachers and colleagues.
It is a formless, indestructible being that has always been like a fish hidden in a spring, that drums up waves and dances by itself. When you look for it in the east, it goes west; when you look for it in the south, it goes north. It can give names to everyone, but no one can give it a name. In all places and all times it is the master of myriad forms, the teacher of myriad phenomena.’ (Quoted in Zen Essence)

When I give zazen instruction, as I did last weekend at Wilbur, I always tell people to notice which leg they put in front (if they are sitting Burmese), or which foot feels easier to have on the thigh (if they are sitting half-lotus), and to switch out to see how it feels on the other side. In the Fukanzazengi, Dogen neglects to suggest this, but contemporary teachers tend to recommend it.

It is always interesting to see the preferences our bodies lean towards, and the asymmetries they can reveal. It doesn’t feel unrelated to me that many years ago I noticed I had a similar bias when I was running, in that I prefered running clockwise circuits (it was not the only reason I didn’t like track running, but it might not have helped). I first became aware of this on a fan-shaped route I used to take from my home in South London to Vauxhall, along the banks of the Thames to Bermondsey and then down to the south – this was in the late eighties and early nineties when the bankside path was not fully fleshed out in the way it is now, and there were some very dark and unused sections in those days, as well as places where you had to come up to the road level instead of being able to stay under the bridges. At first I thought it had to do with following the river downstream, which seemed to help my own flow, but then I noticed the preference come up in other places as well.

At Wilbur, one of my standard runs is up to the medicine wheel, and I did that on Saturday afternoon. Though I have run the route quite a few times now, I have always gone clockwise: up the fire road, and down the Smelter Trail, so this time I was determined to do it the other way. I knew there were a couple of places I would have to pay attention so as not to head the wrong way, but the trail was pretty clear at this time of year. I could also see the notch in the hill I was heading for, which made it easier. Being a trail, some parts of it were steeper than the road, and also, since it was ending up at the same elevation, some parts of it were flatter, so it was a different kind of workout to the more steady climb I am used to. The narrowness of the trail also gave me the illusion of greater speed, a phenomenon I am very aware of both for running and riding – being in a wide open space makes you feel discouraged at your seeming lack of progress. I felt pretty good at the top, and knew I could coast down and enjoy the return. Once thing I did not change though – I always pick up a rock on the way up, to leave at some part of the wheel, and I always circumambulate the wheel, as any sacred spot, clockwise (there is a whole other post I could write about that, and how there are different ideas of how to bow at the altars at Zen Center).

Friday night and morning had been close to freezing, the new moon allowing the stars to appear abundantly, but as the sun rose (and it was high enough above the hillside to shine on the yoga deck for the sitting, which did not happen in January), the temperatures rose to seventy degrees. Later on Saturday, and all the way through to Sunday evening, there was a strong north-westerly wind, much stronger than I am used to here. It even brought a few showers of hailstones on Sunday afternoon, which provided an unexpected soundtrack to the sitting.

After sitting I did my longer run, up to the ridge; since I am accompanying a friend on some of her marathon training runs, I feel I need to keep my own mileage up. Now that I have successfully completed the ridge route three or four times, it does not feel so daunting, but I knew I would also be running into the wind along the spine of the ridge; luckily the hail seemed to have sent the hunters home – we had heard sporadic gunfire as well while we were sitting, and I was poised to blow my whistle loudly if I heard any shots while I was out. This is one route I alternate without much preference – coming from the schoolhouse end, anti-clockwise, as I did on my last visit, the climb to the ridge is harder, but the various undulations on the ridge might be a little better spaced out; coming past the medicine wheel is easier, and after a flat section at the ridge the next slope is steep and fairly relentless. In either case, the views are outstanding; the sun was low, illuminating some slopes, clouds moving by.

There even some early blossoms – redbud on the sheltered side of the hill, and along the ridge, one little shooting star. A wonderful harbinger of spring, which may be further along on my next visit. I awoke early on Monday morning, and as I sat in the outdoor plunge, a celestial shooting star lit up the sky for a moment. Hard to say which is more beautiful. 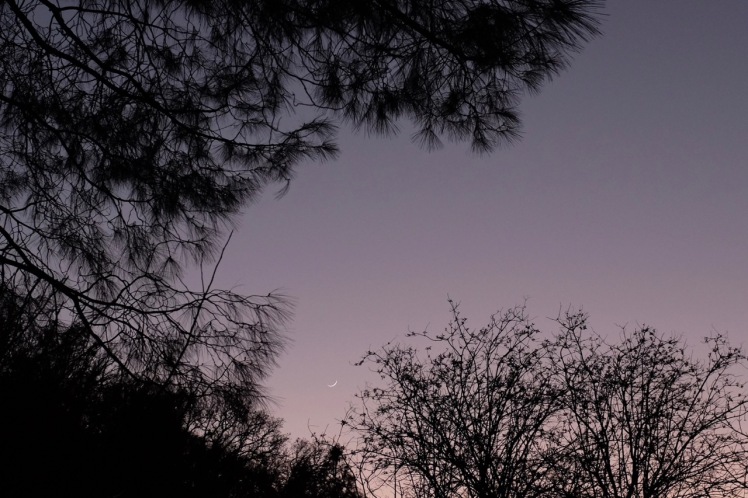 The moon on Friday evening. 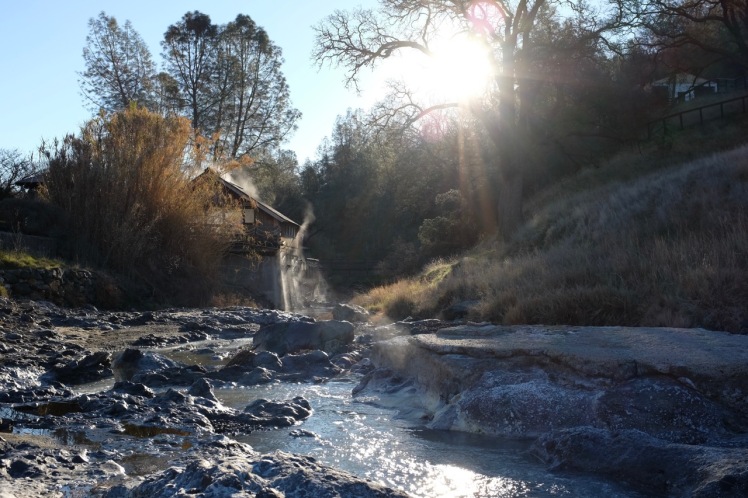 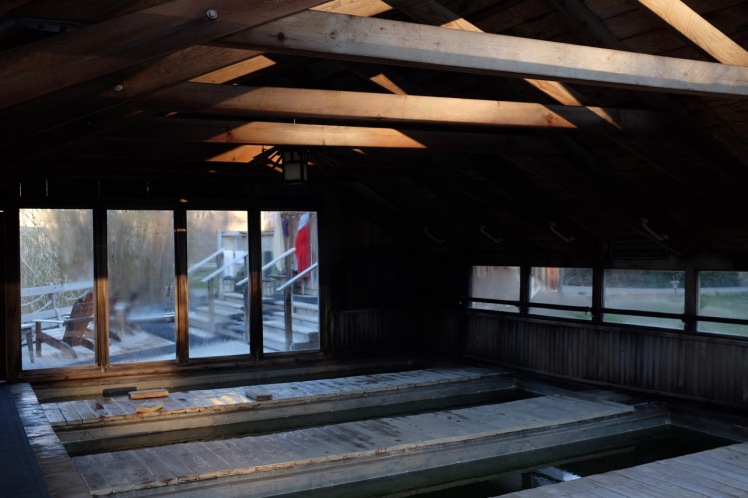 ‘When you practice and learn the reality of zazen thoroughly, the frozen blockage of illusory mind will naturally melt away. If you think that you have cut off illusory mind, instead of simply clarifying how illusory mind melts, illusory mind will come up again, as though you had cut the stem of a blade of grass or the trunk of a tree and left the root alive. This is very natural…
The one-mind which manifests either as thought or no-thought must be something which is beyond these conditions.’ (Samadhi of the Self)

“We can see the functioning of the universe in all our activities – walking, standing, sitting and sleeping – not just in zazen. When you act wholeheartedly, your activity becomes very clear, calm, flexible and magnanimous. It is boundless, and simultaneously it is you. So studying the boundlessness of activity is studying the self. This is called intimacy.
How can you know the meaning of intimacy? You cannot see it objectively because intimacy is not the result of activity; intimacy blooms right in the midst of activity itself. If you try to understand intimacy intellectually, as a concept, you never know real intimacy. Delusion and enlightenment are also concepts, but the perfect supreme state of enlightenment is completely beyond concepts. You are already enlightened, but you can never conceptually know what enlightenment is because when you think of it you create a gap between yourself and enlightenment” (Each Moment is the Universe)