‘Everybody knows that seeking your own peaceful spirit is up to your own practice, and it’s a way to learn how to live, which means you accept yourself totally as you are. Everybody wishes to be a truly satisfactory person, satisfactory to yourself, but this doesn’t happen by hearing somebody say how well you do things or how wonderful you are. You will never be satisfied until you say, “yes” to yourself. Way-mind comes from that area…
Sitting is a sort of forgotten ability of humankind. You know what I’m talking about. When our survival was in danger, in ancient times, this was our main activity. Among all kinds of dangerous animals or poison foods, we had to keep our sense organs still, in order to find our position in the danger. We had internal awareness of what kind of food is good, and what kind of food wasn’t good. Now, after eating, we have to contemplate where those foods came from and where they went. We had many, many centuries of training, natural training. But nowadays, we don’t know who we are, in a very essential sense.’ (Embracing Mind)

Another find from my archives. Of course, to attribute this to Bodhidharma is to risk falling into error, since its source is hard to verify, but I like to let this stand as a summary of the kind of teaching that he is supposed to have brought from India to China (for more on this, listen to Shohaku’s excellent talk on the first morning of the Genzo-e).

‘As long as you identify yourself with the projection of separateness, you will continue to deny that you are the Source of all projections. When you truly and absolutely awaken to this fact, and comprehend the overwhelming implications inherent within this awakening, you will continually experience that all apparently personal relationships are in truth nothing other than the play of your Self.’

I found the article this paragraph is taken from while wandering through the archives on my laptop to prepare for a corporate teaching event. This is not the sort of thing I would teach in that context, but reading it again allowed me to find the ground from which to try to say something helpful. Like reading Umair Haque, I trust Adyashanti to be speaking from a place of deep personal experience and understanding.

I think it is typical that people who practise non-residentially,  and for whom attending a retreat is often the highlight of their practice year, are concerned about how to take the settled mind of retreat back out into the busier world. This week I realised that this is pretty much the first time in my years of practice that I have needed to navigate that transition myself – though I often feel the same way about coming back from a week of teaching at Tassajara, where things are so slow and focused.
A friend of mine who I was emailing with last week laughed when I said that I was still feeling a bit slow, since I had included a list of all the things I had done over the weekend after the retreat – running; riding my bike a couple of times; a regular Roaming Zen (perhaps my largest group yet on a lovely loop from Mountain Lake to Lobos Creek, Baker Beach, Inspiration Point, through the woods past the National Cemetery and Andy Goldsworthy’s Spire); and the first iteration of the Airbnb version of the roam, which I have been working to get off the ground for a few months, and which has some bookings for the weeks before I go to England.
I followed those up on Monday by joining Zachary at the Embarcadero for the lunch-time open-air sitting, which again will be happening through September (with the exception of Labor Day), and in the afternoon I was at the county jail for a meditation session.
Despite all these activities, it did feel that my logistical brain took a few days to get up to speed; going back to my day job felt like a bit of a struggle, and since I have not been sleeping as much as usual for a variety of reasons, I felt physically rather tired through most of the above – especially the lunch-time sitting, even though I had assumed the hours spent sitting during the retreat would have left me feeling at ease for this hour of zazen. And yet there was a part of me that still felt wonderfully open and relaxed about the world, even as the news continues to be fairly dreadful.
On Friday I had another double bill of teaching: a first session at a start-up accelerator where one of my students is getting his company off the ground – it was a very new building in Mission Bay, and a nice group of people, but I would rather have done the session in the garden than in the conference room with noisy air-conditioning but no fresh air; at least I got to spend the rest of the afternoon outside, with another Airbnb roam.
On Saturday I went to Zen Center to offer the zazen instruction, and stayed to hear Tenshin Roshi speak. As it happens, I have been listening to him a lot recently, as I have been editing videos of his talks, some of which should make their way online soon. I wasn’t sure about staying, but there was something about his focused presence as he talked about face-to-face transmission that kept me in the hallway. It was great to be in the building, seeing Zen Center’s most senior teacher addressing the crowd – I saw some old faces who do not come around so often, as well as the new faces of the latest guest students, and those who might eventually come to be leaders at Zen Center. At the same time, I was enjoying the pigeons nonchalantly bathing in the fountain in the courtyard, and the traffic passing by out on Page St.
After I left, I discovered that the bright, clear morning had turned into one of those wonderful eighty-degree days in San Francisco, with deep blue skies and no wind. It was easy to feel expansive and loving out in the sunshine. The good weather continued through Sunday, when I had another Airbnb roam with a couple of very enthusiastic women from Japan, with whom it was especially fun to share some of my favourite quiet corners of the city.
I have felt very happy and lucky to be able to teach on consecutive days like this, and also to get to spend so much time out in the less built-up areas of the city. As Tenshin Roshi observed, face-to-face transmission is not just from person to person, but also between people and objects; when we can be open, in the way that has coming up for me at times these past few days, we can see how each and every thing expresses the unfolding of true reality in each moment.

This is a view like the one I had on Saturday, from the hallway into the Buddha Hall 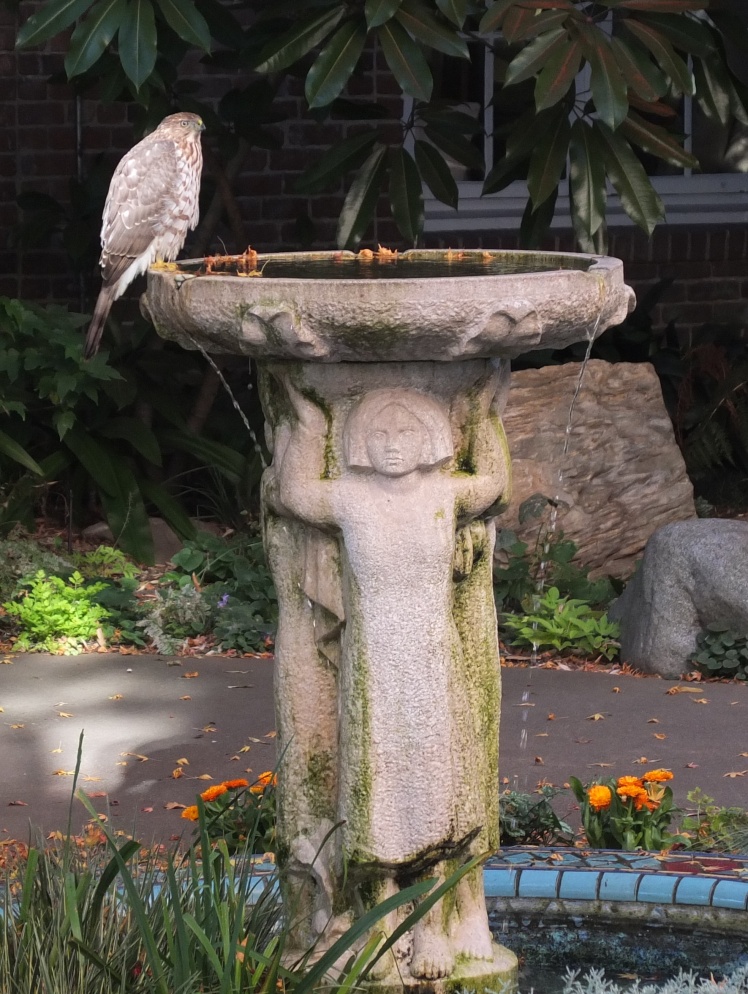 I didn’t find any archive pictures of pigeons in the fountain, but one time we were visited by an osprey – I think it had a nest over the road in the park.

A person doesn’t know what he’s doing,
Lets it all happen naturally.
All the sages in history can’t explain it,
And ordinary people don’t understand it either.

‘No matter how much we have we always want more. This greedy love that always wants more but will not let go of what it already has, all of this attachment, has to be cut, otherwise our lives are painful. Once we cut this need for attachment we can know peace of mind for the first time. We spend so much time with thoughts of our children and our bodies – this must be cut through or we will never be liberated. All our thoughts must be thrown away – those lingering wisps of thoughts that are always flying back and forth – we must get rid of them and awaken to that true and clear mind with which we are all endowed.’ (The Path to Bodhidharma)

‘There are many interesting things to do in the human world. To do as much as possible keeps you busy making lots of sounds. That’s fine, but you have to understand that these sounds come from no-sound. If you always understand sound as coming from sound, you become confused and lose the direction in which you should go. You have to know no-sound, because no-sound is your nature. Then, very naturally, you will want to come back from no-sound and look at your own particular sound. That’s wonderful. Thank you can know it.
Zazen is to come back to no-sound. Come back to the sound of no-sound and see it. It’s not just your limited territory, it is a vastness from which your capacity, your knowledge, your nature comes, just like spring water coming up from the earth. This is zazen, exactly; this is you.’ (Returning to Silence)

‘It is only due to our concepts that we feel separate from the world. We are isolated by ideas of inadequacy, ideas of danger, ideas of loneliness, and ideas of rejection. While we may indeed face external difficulties, our thoughts can amplify them – or even create them, leading us deeper into delusion. If we do not want to e enslaved by our thoughts, we can choose to transform our minds. In any given moment, do I choose to strengthen the delusion of separation or the truth of connection?’ (Lovingkindness)

‘A monk asked Joshu, “What is my essence?”
Joshu said, “The tree sways, the bird flies about, the fish leaps, the water is muddy.”‘

What is your essence right now? Can you hear the tree and the bird?

So Dogen is playing Lingzhao’s game. How does that sound today? Do you want to thoroughly discern it? Perhaps you need to find one phrase that expresses the essence. Quickly, quickly!